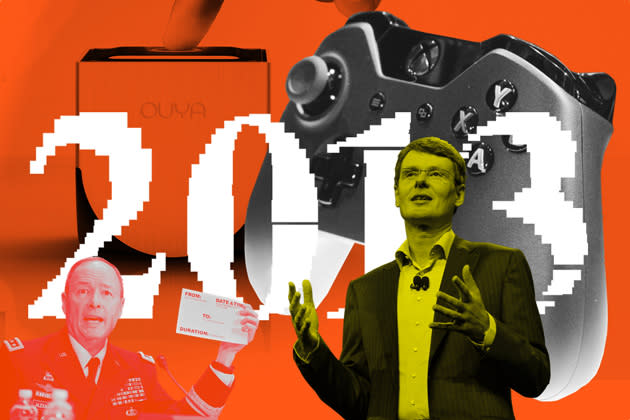 You can't win 'em all. The adage certainly holds in the fast-paced world of technology, where one small slip can put a damper on your entire year. Every year, among all of the celebrations of top gadgets and big news stories, we like to take a moment to acknowledge the other side of things. This time out, it's a pretty diverse list, from flubbed Kickstarter launches to massive governmental privacy breaches and yet another really lousy year for one smartphone manufacturer. But don't worry everyone; the year 2013 is nearly over.

Microsoft gets DRM-happy with the Xbox One

After nearly a decade between consoles, Microsoft's Xbox One got off to a bit of an inauspicious start. What should have been a celebratory time for the gaming powerhouse was preceded by something of a muddled mess, thanks to a jumble of confusion surrounding the admittedly obtuse digital strategy put forth by Redmond. One thing was for sure: Gamers were pissed about the console's DRM, most notably the 24-hour physical disc check-in for used games. The plan was even more problematic for those without access to a stable internet connection. Anyone who's ever spouted that tired cliche about there not being any such thing as bad press has clearly never been on the wrong side of a video game flame war, and with its chief competition, the PlayStation 4, launching at virtually the same time, Microsoft saw fit to make a change.

Xbox head Don Mattrick took to the console's official site to confirm that the gamers had won, thanking them for their "assistance in helping us to reshape the future of Xbox One." It was a pretty sweeping reversal on a policy for which the company had seemingly been unwilling to budge. It's tough to say how much of an impact such a policy would have ultimately had on the next-gen console's sales, but with a price $100 greater than Sony's offering already working against it, the added negative publicity certainly couldn't have helped. In the end, plenty of zombies were shotgunned via the Xbox One -- and isn't that what really counts? Granted, it's not as if all this went down in the 2013 calendar year, but given the sorts of revelations that were uncovered, we'd be remiss if we didn't include it this time out. The question, then, is where precisely to start with the government agency's laundry list of civil liberties violations? After all, while it's likely that few were genuinely surprised that the government's been doing this manner of snooping, the information revealed by Edward Snowden was shocking in precisely how deep, thorough and extreme the NSA's collection methods were.

Given the nature of this here site, PRISM seems as good a place to start as any. One particularly incriminating slide highlighted the NSA's information-skimming from the servers of technology's biggest names, including Apple, Microsoft, Google, Yahoo and Facebook. After denying foreknowledge of such spying, a number of often adversarial companies teamed up for an open letter to the US government. As the saying goes, clandestine mass-electronic surveillance programs make strange bedfellows.

DMCA phone-unlocking ban is back in action

Remember that great exemption by the Library of Congress that made it legal to unlock your phone? Remember how it sounded too good to be true? Remember how unsurprised you were when the three-month window ended and the Copyright Office wasn't exactly jumping to renew it. And while the legality of unlocking is still pretty murky, the situation raised alarms for pretty much everyone from the ever-vigilant Electronic Frontier Foundation to President Barack Obama. In fact, in September, the White House petitioned the FCC to require carriers to let consumers unlock their handsets.

Pretty Much Everything BlackBerry

Listen; we're as sick of including BlackBerry on this list as you are reading about it -- the company's managed to make its way onto this list in some form or another since we started compiling it back in 2011. And while we've been holding out hope that the Canadian smartphone manufacturer would have turned things around by now, each new piece of news out of Waterloo seemingly confirms that it hasn't quite found the bottom yet. By all accounts, it should have been a banner year for the company, wrapping up January by launching the long-awaited BlackBerry 10 with a bang. The release arrived with two new handsets -- the Q10 and Z10 -- and a complete rebranding for the company, finally shedding the stuffy Research in Motion moniker for the more familiar BlackBerry. Shortly after the announcement, the company's newly named creative director (and sometime singer-songwriter) Alicia Keys tweeted from her iPhone. It wasn't a make-or-break moment for the smartphone wars, but it was hard not to read the gaffe as symbolic of the company's larger struggles.

In March, new CEO Thorsten Heins announced that the company wasn't interested in targeting the developing world, and the following week, BlackBerry's tone-deaf band was at it again with an Etta James parody announcing that the OS was finally ready to ship. When we got our hands on the new phones, it was pretty clear that they weren't the game-changers BlackBerry was clearly gunning for. Revenue proved disappointing, as well, as the smartphone maker continued hemorrhaging jobs again and again. And as for the "budget" Q5, well, if you can't say anything nice... In September, it was announced that the company had lost a billion dollars in a three-month period. Later that month, amidst much speculation, an Ontario-based financial holdings company was set to take over, only to have the deal fall through, instead opting for an investment, while ousting Heins, who joined the CMO, CFO and COO in the long line of Blackberry job losses. Just last week, it was revealed that the company's continued financial woes put the kibosh on plans for two budget handsets.

New CEO John Chen has, naturally, remained bullish (if, understandably, grounded), projecting profitability by 2016. In the meantime, don't be too shocked if BlackBerry winds up on another of these lists before it's all over.

This one kind of hurts. Like many of you, pretty much everything about OUYA excited us, not the least of which was the prospect of a small hardware startup disrupting a gaming industry dominated by three giants. And heck, the company deserves some points for delivering a product at all, in an age when Kickstarted hardware projects feel like a crapshoot, at best. When the Android console finally launched, however, it was pretty clear that the first-generation console wasn't ready to take on the heavy hitters.

By most accounts, the device still felt like a beta unit. The controller was a bit crummy and the game selection wasn't quite there -- hardly the sort of launch it needed to compete with the Nintendos, Sonys and Microsofts of the world. Since then, however, the team has been hard at work on improving the console's overall experience, adding games, improving the controller, expanding storage (see above image) and even taking a break to mess around at E3.

Illustration by Greg Grabowy; Photos: National Security Agency (NSA) Director Gen. Keith Alexander (AP Photo/Manuel Balce Ceneta); Thorsten Heins, president and CEO of Research In Motion (AP Photo/Reinhold Matay)
In this article: blackberry, blackberry 10, drm, edward snowden, hgg, microsoft, mobilepostcross, nsa, OUYA, prism, xbox, xbox one, year in review, yir
All products recommended by Engadget are selected by our editorial team, independent of our parent company. Some of our stories include affiliate links. If you buy something through one of these links, we may earn an affiliate commission.