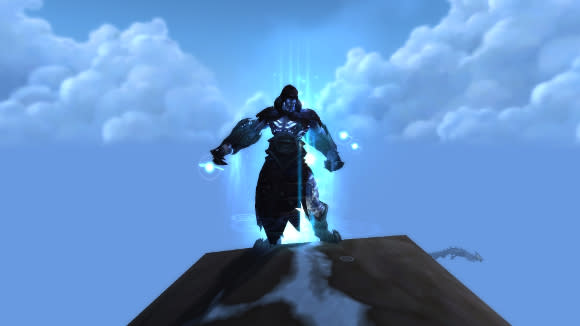 I was chatting on Twitter recently about how I sort of miss Deathwing. Not in his raid boss form, nor even in his quests in the Badlands. I miss the big scary dragon randomly flying around the world, setting it aflame. And, of course, frantically mounting up to try to intercept his fiery breath to get the achievement, Stood in the Fire, before it was added to the raid.

And that got me thinking. What's your greatest WoW achievement? It doesn't necessarily have to be something remarkable or clever, nor even something hard to do, or something you had to grind out over weeks or months. Or, of course, it could be all those things!

Mine, well, I think it was the time got the Hot Streak achievement on my ret pally. I was well into my PvP when it appeared, and playing a lot, and we'd been trying to get it but always lost the 10th game. One night we had some adult beverages, and just did some silly 2v2, nothing serious, but we weren't even paying attention when it popped up. I'm not sure why, but that stuck in my mind.