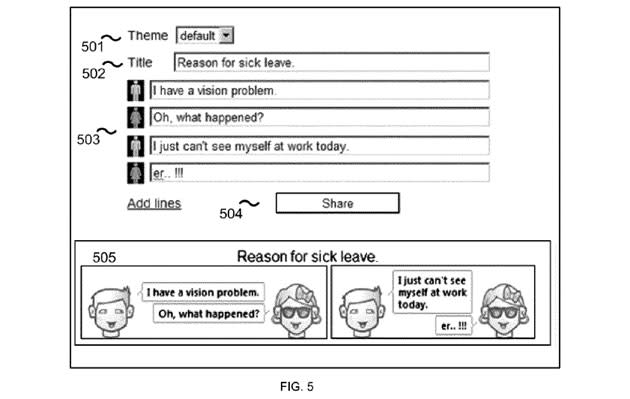 Deep down, we'd all like to believe our text-based interactions are worthy of Calvin & Hobbes-style witticisms. They're not and you know it, but does Google? No matter, because the tech giant was just awarded a patent to format your virtual conversations into something more suited for comic strip syndication online. The concept, though gimmicky, isn't as freshly innovative as it might first sound. In fact, both Apple and Microsoft have already had designs on the same. Anyone remember Microsoft Comic Chat?

Okay, so Google's comic-making process is nothing new, but it does have a key differentiator: It's shareable via email, IM or, more likely, a social network "stream" or profile page. The system, as outlined by the patent, merely repurposes conversations, either manually or automagically, between at least two people into a comic strip layout. It's then given a title by the user, an appropriate theme as selected from the user interface and formatted for its intended destination. Beyond that, it's all a matter of where the strip gets posted. Editing permissions can also be extended to second- and third-party users so that the strip lives on. No doubt, it's a fun way to jazz up otherwise mundane online interactions, but that doesn't mean we'll ever actually see this comic generator come to light. You know how these things go. It's a patent; it's good for litigation.

In this article: comicbooks, comics, google, patent, socialnetwork, USPTO
All products recommended by Engadget are selected by our editorial team, independent of our parent company. Some of our stories include affiliate links. If you buy something through one of these links, we may earn an affiliate commission.