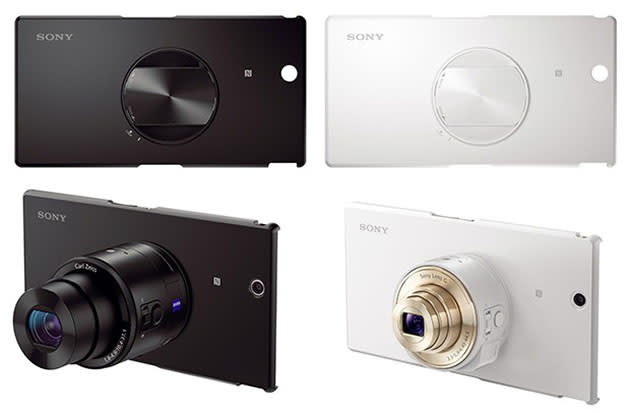 Though Sony's crazy QX10 and QX100 lens cameras can attach to most smartphones, the company naturally favored its own Xperia Z and Z1 handsets by creating custom cases for those devices. Now it's doing the same for its crazy-large 6.4-inch Xperia Z Ultra, according to our sister Engadget Chinese site. A new attachment cover in black or white will fix either camera to its latest phablet for HK$238 (about $30) on top of the price of the QX10 ($249) and QX100 ($499). If you'll recall, that'll boost your smartphone's shooter to either an 18.2- or 20.2-megapixel monster, respectively, with the latter boasting the same sensor as the formidable Sony RX100 Mark II. It'll arrive next month in Hong Kong, and while Sony hasn't divulged availability elsewhere, we can picture it hitting the US soon as well.

In this article: camera, lenscamera, QX10, QX100, sony, XperiaZUltra
All products recommended by Engadget are selected by our editorial team, independent of our parent company. Some of our stories include affiliate links. If you buy something through one of these links, we may earn an affiliate commission.