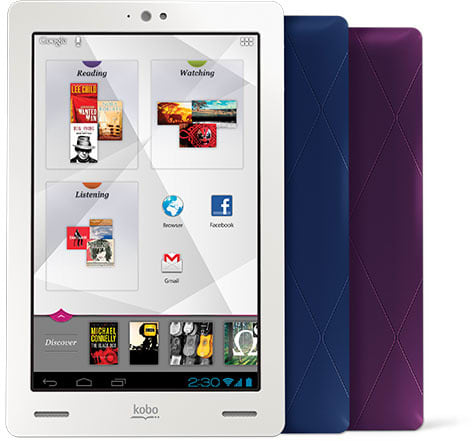 Perhaps there's something to be said for setting the bar low -- at the very least, it leaves you with ample room to shine in the next round. That's where Kobo, the Canadian-turned-Japanese company, was when the Arc ($200 and up) landed on our desk, and we'll tell you right now that the 7-inch tablet mops the floor with its predecessor. In the time since that device was released, however, the rest of the budget tablet market has stepped up its game, with Google's Nexus 7, Amazon's Kindle Fire HD and Barnes & Noble's Nook HD running neck and neck. Has Kobo sufficiently cleared the bar this time out? You're gonna have to click on through for the answer to that one.

Kobo's upped its game since the bitterly disappointing Vox, but this 7-incher just doesn't offer enough to distinguish itself from the competition.

How would you rate the Arc?
We want to hear what you think. Post a quick review now to join the conversation!
Write a review

The Arc isn't much to look at. The company's maintained the Vox's square form factor, while trading in its all-glass front for a bezel-heavy configuration. Kobo may have taken a page out of Barnes & Noble's playbook here, swapping out the relatively slick look (not to suggest that the Vox was ever particularly slick, per se) for utility. This gives you a place to stick your fingers while you read that won't leave behind your greasy smudges. That's not to say that it's particularly comfortable to hold. At 0.5 inch thick, it's a beefy thing -- thicker than the competing Kindle, Nook and Nexus tabs. And at 12.8 ounces, it's heavier than both the Nook and the Nexus 7 (though still lighter than the 13.9-ounce Kindle). It also lacks the handy concave back of Barnes & Noble's tablet. What it lacks in sleekness, however, Kobo claims it makes up for in ruggedness: the device can withstand 1.5-meter drops. We didn't battle-test the tablet, but we should point out that the finish on the black version we tested was already beginning to rub off after just a few days in a messenger bag.

Along the bottom bezel, a small white Kobo logo is flanked by two oblong speaker grilles. Kobo definitely gets some points for placement: it stuck the sound sources on the front of the device so that they're pointed at your face as you're listening to music or watching videos -- something we can't say about similar products from Amazon and Barnes & Noble. These guys get loud, too -- surprisingly so for a device like this. The sound quality, however, leaves a bit to be desired: it's tinny and distorted, particularly at higher volumes. For extended listening or viewing marathons, you'll definitely want to plug in some headphones if you hope to hear things clearly.

On the top bezel, you'll find a 720p camera for some hand-held Skyping (let's face it, a front-facing 1.3 megapixel still camera on a 7-inch tablet isn't destined to become anyone's default picture taker). This is also present on the Nexus 7 and Kindle Fire HD, but sadly absent on the Nook HD (and HD+, for that matter). Along the top, you've got the power button, with the headphone jack placed on the side of the device somewhat strangely, just next to the volume rocker. On the bottom is a micro-USB socket for charging and connecting the tablet to your computer. Again, Kobo picks up a couple of points for not going with a proprietary charger here.

The 7-inch IPS display clocks in at 1,280 x 800, matching what you'll find on the Nexus 7 and Kindle Fire HD and blowing past the iPad mini's 1,024 x 768 -- though it does come up short of the Nook HD's bar-raising 1,440 x 900 resolution. With a 1.5GHz dual-core processor and 1GB of RAM, the Arc handled pretty much everything we threw at it. And while the memory's not expandable, the 16 to 64GB of built-in storage should be sufficient for most folks.

Fans of aesthetic consistency will also note the return of the quilted-diamond pattern on the rear cover. Kobo's once again opted to forgo sleekness, this time for the sake of brand recognition. It does, however maintain the soft-touch back that's become a bit of a standard on many e-readers (Kobo's included) and smaller tablets. And like the Vox, you can pry the back right off with a few well-placed finger nails, giving you access to the battery should you need to make a swap, which speaks to a general level of openness that's missing in many of these devices. It also affords you the opportunity to swap it for a different color back (at $20 a pop), if you're the sort who needs to coordinate your tablet with the rest of your wardrobe.

Here's something the Arc's got over the Kindle and Nook: a full Android experience. Unlike the Fire, which has skinned Google's mobile OS beyond recognition, there's some very clear evidence of Ice Cream Sandwich running here. Perhaps even more significant is the fact that you've got unfettered access to Google Play -- something missing in Amazon and B&N's offerings. Those wanting the latest and greatest version of Android unskinned, however, will obviously want to take a long hard look at the Nexus 7. As it is, Kobo wasn't going to leave things be: it applied quite a few customizations on top of Android. The result is a cramped homepage featuring clusters of content Kobo calls "Tapestries," centered around things like entertainment, social and, of course, reading. Click on one and it will bring you to a page featuring those apps (Facebook, Twitter, Pinterest and Skype, in the case of "Social"). The good news here is that you can delete these from the desktop, should things get too claustrophobic for your tastes.

The reading features are the main adjustments the company made to the stock Android. Click on the corresponding Tapestry, and you'll see your current reading selection (which you can cycle through with a swipe), the amount of time you spent reading and suggested books based on your taste. There are also links to your full library, the Kobo Store and Taste Profile, an app that helps you build better suggestions by voting on different titles, Netflix-style. You can still access your Reading Life profile as well, but this time out Kobo smartly opted not to make it a centerpiece feature of the tablet. Competing for reading badges was never really the selling point the company always seemed to think it was.

Kobo's devoted bookstore offers up a purported 3 million books -- around a third of which are free. We found most of what we were looking for, but as with all major e-book stores, there are still plenty of titles that haven't made the jump from the physical medium. Kobo's leaning on Zinio for magazine offerings here, which is a pretty solid choice with around 5,000 different titles. And while neither offering is great for comics, you can always head over to Google Play. All of this brings up an interesting conundrum: while choice is great, it can be a bit of a pain relying on three different sources. Given Play's selection of apps and multimedia, however, we can definitely see plenty of users eschewing proprietary content for Google's offerings. We're not in love with the walled-off approach, but there's something to be said for the convenience of getting your content from a single source like Amazon, Apple or Google.

Placed against the low, low standard of last year's Vox, the Kobo Arc is a winner. Compared to the rest of the 7-inch tablets in the world, however, it's a non-starter. The Arc's not a bad device, by any means, but given the portion of the public that's already served by the Kindle Fire HD, Nexus 7, iPad mini and Nook HD, it's tough to say who the Arc is for. Be it a high-res display, open Google Play access or cross-cloud reading, there's really nothing Kobo does particularly better than everyone else.

In this article: arc, e book, e books, e reader, e readers, e-book, e-books, e-reader, e-readers, kobo, koboarc, review
All products recommended by Engadget are selected by our editorial team, independent of our parent company. Some of our stories include affiliate links. If you buy something through one of these links, we may earn an affiliate commission.