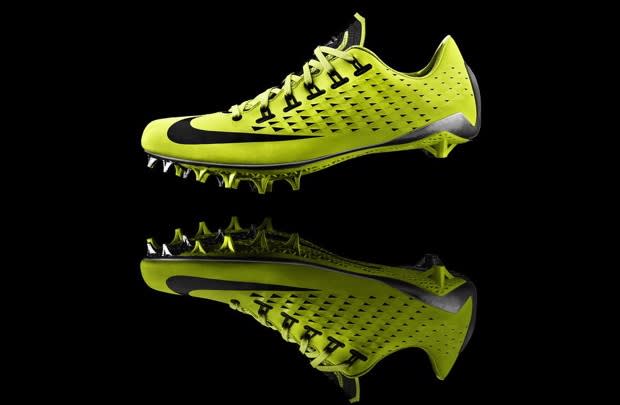 While we're still giddy at the idea of printing our own phone case, Nike's gone more than a few steps further with its latest innovation. The Swoosh has managed to 3D print the base plate of its latest football cleat, the Vapor Laser Talon. The boot was created using Selective Laser Sintering (SLS), which uses high-powered lasers to fuse pieces of plastic together, rather than the more basic methods we've seen in the Makerbot. Not only did SLS enable the company to produce a shoe that would otherwise be impossible with traditional manufacturing techniques, but it was also hammered-out in a fraction of the time. There's no line on when we'll be able to pick one up (or how much it'll cost you), but we imagine you'll pay a premium for that extra bit of speed.

Source: Nike
In this article: 3D printing, 3dPrinting, Nike, Nike Inc, Sci/Tech, Selective laser sintering, Vapor Laser Talon, VaporLaserTalon
All products recommended by Engadget are selected by our editorial team, independent of our parent company. Some of our stories include affiliate links. If you buy something through one of these links, we may earn an affiliate commission.