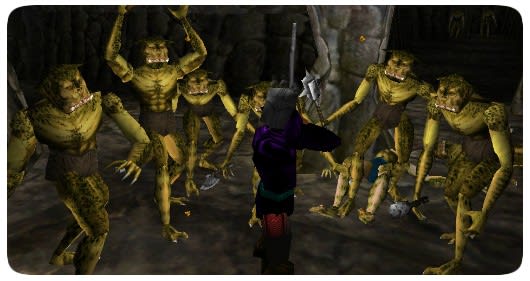 I've written before about how to accept your fate as a permanent newbie, international game explorer, or constant PvP victim. It has always come down to accepting the fact that many MMOs require hours of dedication in order to become skilled. Sure, we can break down what "skilled" really means and examine what sort of timetable is realistic for most human beings, but let's just say that we're past that. We're well into the territory of accepting our fate as a digital traveler, someone who simply cannot say no to a new MMO.

This time I thought it would be better to list some lessons on how I learned to love the MMO explorer lifestyle. It worked for me! (Cheesy theme music starts in the background.)

I am currently involved in a long-term life project that has me attempting to scan in, take a picture of, or otherwise describe almost every important bit from my life. I've decided to be satisfied with certain limits by avoiding obsessing over the project to the point that I might dig through trash for old receipts for packs of gum. My digital life and collection really started in '99, when the little lady and I got our first PC. But those pre-PC years? Those are the hard ones. I started by listing a year and then important memories during that year, and then details of those memories. It's a work in progress, to say the least, but by the time I'm elderly, I'll have a wonderful thing to look back on.

That same drive to collect and store information from my childhood has been used to go after information about my oldest MMO characters. The best way I have found to keep a collection updated is by using screenshots. A lot of screenshots. I currently have thousands, but with dozens being added each week, it's easy to see how important it is to keep the collection organized as I take them. If you can snap a picture of your very first character in a new game, do so. Keep all of the shots collected, but come up with some sort of system or you'll be swamped. Just imagine looking back over a decade, or better yet, two or three decades of game shots. If they're organized, you'll be very happy.

I still think that the main reason players return to any MMO is stuff. Digital bits of goodness are what pulls us in. The possibility of getting even better stuff keeps many of us grinding or playing games that we really don't even enjoy anymore -- yes, even someone like yours truly who considers himself an MMO vagabond drools over the idea of certain items, and I definitely have my favorites. The infamous cardboard tube sword in Mabinogi, for example -- I'll log in just to make sure she's still there. Unfortunately, not all items last forever, and there are even some titles that will leave you with nothing if you forget to log in every so often. MMORTS games are notoriously hardcore, and I've lost so many cities because of my forgetfulness. For a long time these disappearances scared me enough to stress me out. I still make lists of MMOs, but they used to serve as a reminder service so I would not forget to log in and dust off my digital shelf.

After a while, however, I gave up on trying to keep up with every MMO. I still feel a pang of regret when I lose a cool item from an abandoned account or when my house rots away due to unpaid rent, but overall I know that it's not only just stuff but digital stuff, and there's usually a good chance I can get the item -- or something similar -- back. If you've taken those screenshots as I mentioned before, you'll at least have a picture of your favorite items! Most of the time, that's enough.

Learn to play (over and over again)

Rise and Shiny has taught me more about MMOs than I thought I could ever know. In that column, I look at a different game each week, usually playing it for about eight to 12 hours. Sometimes I will take a second or third look at a previous title just to check back and see how it's been faring, but generally I am exploring at least 45 or so brand-new (to me) titles per year! The column made me get over any worry about being seen as a newb or as someone who supports a certain "lifestyle" just because I cover odd games or games with an interesting playerbase. Needless to say, I spend most of my time readjusting to new sets of rules. On top of that, a week is hardly enough time to become really good at most MMOs.

I'm perfectly fine with admitting how little I know about many titles. The truth is that my knowledge about MMOs in general is pretty vast, especially considering how similar MMO systems are to one another. But I have to be cool with being a newb in new games. It's not so easy for many players I meet. Class-based titles are still very popular because they give players something to research and to prepare for. Classes and linear questing give players a limited set of variables, numbers to be crunched and passed on to others. I completely understand how this can be fun for someone, but I'm also in love with sandbox play. I basically try to take and each title as it comes along, and I try to avoid categorizing the game until I can actually play it.

If you're going to skip from title to title, then you need to let go of that part of your ego that says there's something better about knowing everything about a game instead of being new to a game. As much as I value these games, I've learned to leave them in their place. Perhaps it comes with age, but I get such a thrill out of gaming now that I don't need to become skilled at a game to enjoy it; it's just a game. In fact I have found that I enjoy a game less when I approach its zenith or when I play it all the time. That's not a flaw in MMOs as a design; that's simply how I have learned to enjoy them. Your experiences may vary.

It's always possible that I am writing this more updated version of my vagabond rules to make myself feel better about missing all of the fun that raiders, hardcore PvPers, or obsessive roleplayers are having. That's partially true. I realize, though, that I can admit that only because of my gaming lifestyle. Thanks to my explorations, I now value all types of play.

Each week, Free for All brings you ideas, news, and reviews from the world of free-to-play, indie, and import games -- a world that is often overlooked by gamers. Leave it to Beau Hindman to talk about the games you didn't know you wanted! Have an idea for a subject or a killer new game that no one has heard of? Send it to beau@massively.com!
In this article: alganon, beau-hindman, darkblood-online, f2p, fallen-earth, featured, ffa, free-for-all, free-to-play, freemium, mabinogi, newbie, Nexon, nexon-america, noob, opinion, vanguard, Vanguard-Saga-of-Heroes, velvet-rope
All products recommended by Engadget are selected by our editorial team, independent of our parent company. Some of our stories include affiliate links. If you buy something through one of these links, we may earn an affiliate commission.