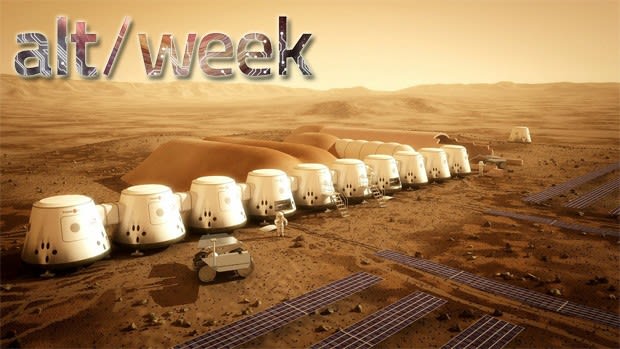 Well, here we are. It's happening. We're officially talking about setting up a human colony on Mars. Not only is this very real, it's something you can be part of. You don't have to leave the planet to get your extra-terrestrial fix though, as our two other stories demonstrate. This is alt-week.

First up is a quick tribute to the Herschel telescope, which slipped out of service this week. The European Space Agency project took off almost four years ago, and is responsible for 35,000 scientific observations, while collecting more than 25,000 hours' worth of data. When it launched on May 14th 2009, it did so with 2,300 liters of liquid helium coolant which have now been exhausted, causing all systems to overheat. Herschel's image archive leaves a lasting legacy from the mission, which is expected to continue providing new discoveries for a long time to come. For now though, it's "so long, and thanks for all the fish."

What you see above definitely wasn't spotted by the Herschel telescope. The tiny skeleton was found in the Atacama desert about ten years ago, and its origins are still a mystery. Despite being just six inches tall, with a cone-like head, researchers at Standford's School of Medicine claim that every nucleotide observed from the remains is human. DNA tests even suggest that it was between six and eight years old when it died. Perhaps more unusual is the fact that there were no signs of dwarfism. One possible clue to its origins comes from tests on the mitochondrial DNA (an element passed from mother to child), which shows a possible match for an indigenous Chilean ancestry. Of course, the skeleton's unusual size and shape has invariably stirred chatter of otherworldly beings among certain groups, but the scientists haven't found anything that remotely suggests this. The mystery continues to spark interest, with the skeleton also featuring in a recent crowd-funded documentary on UFOs Sirius Disclosure.

Some people will do almost anything to get on TV, even if it means leaving your loved ones behind forever on a one-way trip to Mars. The Mars One project -- which hopes to send a number of "lucky" members of the public to colonize the red planet -- has apparently received over 20,000 applicants. Each one will have paid a processing fee of around $38, meaning these are at least more than just casual form-fillers. One major talking point of the expedition, is its reliance on television rights for funding, leading some to describe it as a reality-TV show. This is something Bas Lansdorp, co-founder of Mars One, is keen to play down, insisting it's a serious mission. That said, Lansdorp reportedly admits the selection process would likely include a public voting component, based on profiles and introduction videos, with the final decision being left to a panel of experts. The hardware used to ferry the winners would come from existing industry players, such as Space X. Budding astronauts have at least ten years to prepare for the trip, with Mars One hoping to land the first wave of settlers in 2023, and if you think you're ready to leave it all behind, you've got until August to put your money where your mouth is.

In this article: alt week, alt-week, AltWeek, marsone, MarsOneProject, video
All products recommended by Engadget are selected by our editorial team, independent of our parent company. Some of our stories include affiliate links. If you buy something through one of these links, we may earn an affiliate commission.