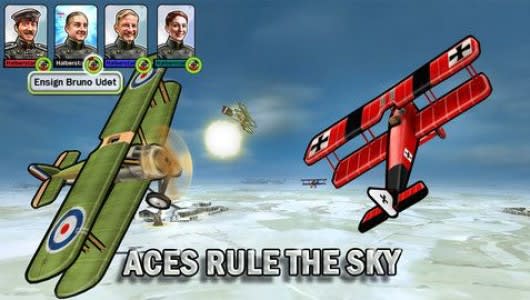 There's a certain stigma attached to strategy games, where deep systems and mechanics can hoist a sky-high barrier for the uninitiated. Sid Meier's Ace Patrol sidesteps these stigmas, presenting a turn-based experience so simple that even the strategically challenged will be able to play and excel.

Designed for iOS devices, Ace Patrol is a dogfighting game set in WWI. With a series of taps, intense air combat is engaged over a battlefield of hexagonal grids. Using these taps, players execute everything from strafing to swooping dives, hard banking, the Immelman turn and other expert maneuvers. Ace Patrol starts with a tutorial campaign based in the British theater of war, offering a few missions to wet your beak before asking for $0.99 to unlock the rest. While Ace Patrol is technically a free game – those introductory missions and multiplayer are all that's in the basic free version – it's that $0.99 that opens up the rest of the British campaign. From there, you can unlock subsequent campaigns centered on the Germans, French and the US for $1.99 each (or $3.99 for all three).

Each of the campaigns offer a range of different missions, from escorting VIPs to attacking targets behind enemy lines to straight-up elimination skirmishes. You never have to control more than four planes at a time, so the battles themselves are manageable in scale. You never have to zoom in and out on a large battlefield to keep track of many units, which helps expedite every mission and keep the pace up.

Combat itself is very streamlined, with everything being achieved through contextual taps, movement patterns dictated by your plane's angle and previous vector, but it gets intense when you start to consider meta-movement. A pilot's arsenal is chosen from various movement cards, beginning with a basic set that grows as your pilot levels up. Naming pilots, choosing their maneuvers and upgrades instills the same sense of ownership seen in the Civilization series and, most recently, XCOM: Enemy Unknown.

Essentially you spend a lot of time precisely lining up your plane in order to attack in Ace Patrol, but thankfully, it never gets boring. Despite the bright and colorful presentation, each dogfight is mostly grounded in reality. Attacks and maneuvers never stray far from what was possible with these old planes, and it's refreshing to fight within those parameters. And, because these skirmishes are generally brisk, no scenario ever languishes. The speed of play and the rhythm of completing missions, upgrading my planes and diving back into the fray kept me enthralled throughout.

A few hours in, my play style shifted from adapting to what was currently on the screen to planning three turns ahead. That's the real strategy in Ace Patrol: recognizing movement patterns and the resulting restrictions. If an enemy is banking to the left, for example, it stands to reason that he can't make a hard right with his next turn, so it's advantageous to stay on his right side.

Once I understood this, my combat experience ascended from a caveman poking dots on an iPad to that of a learned scholar, carefully weighing each choice with the gravitas it deserved. Once I'd taken care to level up my pilots in specific ways, I felt settled and capable. I'd bait-and-switch enemies by luring them to my tail-side, only to pull off some dazzling maneuver and turn the situation around on them completely. It's these moments that made Sid Meier's Ace Patrol so rewarding to play.

Two players can dogfight one another on a single device, assuming you can avoid from peeking over each other shoulder (or at least keep it secret). There's also asynchronous network play through Game Center, but that feature is currently down in the latest version of Ace Patrol. An upcoming update should take care of the problem, but it has no release date as of this writing.

I've always relished Firaxis for its strategy systems, the kind of complex algorithms that dictate the speed of my colony's development in Civilization. The surprising thing about Ace Patrol is that it does away with all of that, much like Civilization: Revolution did with some of the more intense and monotonous systems of the Civilization series. Sid Meier's Ace Patrol champions simplicity over complexity, creating a refreshing and surprisingly sustainable experience rooted in a single premise: shoot down the other guy before he gets you.

Ace Patrol is all broad strokes, offering high levels of play packaged in a simple, intuitive interface. With just a few taps, you feel like an ace pilot, except without the expensive lessons, tedious class room hours or the uncontrollable urge to reach for the air sickness bag at 10,000 feet. Having played so many of the Firaxis' games and having spent so much time learning their intricate mechanics, I'm pleased to report the simple elegance of Sid Meier's Ace Patrol doesn't diminish the satisfaction and underlying depth the studio is known for.

This review is based on the iPad version of Sid Meier's Ace Patrol, provided by 2K Games.

Joystiq's review scores are based on a scale of whether the game in question is worth your time -- a five-star being a definitive "yes," and a one-star being a definitive "no."Read here for more information on our ratings guidelines.
In this article: 2k-games, firaxis, Firaxis-Games, ios, ipad, iphone, mobile, sid-meier, sid-meiers-ace-patrol
All products recommended by Engadget are selected by our editorial team, independent of our parent company. Some of our stories include affiliate links. If you buy something through one of these links, we may earn an affiliate commission.