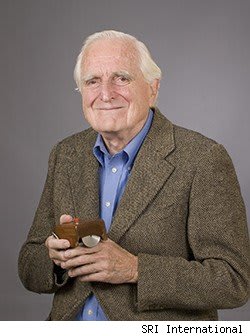 Douglas Engelbart died on July 2 at age 88. If that name doesn't ring a bell, then look at your computer mouse and give thanks to this World War II radar technician who came up with the idea in the 1960s. Engelbart also influenced computer use in other ways, such as working on the use of multiple windows, network computing technologies. In addition, his lab helped develop ARPANet, which was the government network that predated the Internet.

Engelbart had a long history in electronics, electrical engineering, innovation and design. He had a burning desire to boost "our collective capability to solve important problems intelligently, for which he coined the term Collective IQ," as noted through his web site. He holds 21 patents in his name; some shared with associates.

Multiple sources cite that Engelbert's work and thought processes on computing, as it relates to human cognition, was significantly influenced at the young age of 20. While in the Philippines in 1945, he read an article in "The Atlantic" by Dr. Vannevar Bush, "As We May Think." The New York Times notes that Bush "described a universal information retrieval system called Memex. The idea stuck with Engelbart, and he made it his life's work."

John Markoff of The New York Times writes that "It was his great insight that progress in science and engineering could be greatly accelerated if researchers, working in small groups, shared computing power. He called the approach "bootstrapping."

According to the Associated Press, SRI International CEO Curtis Carlson said "Engelbart brought tremendous value to society." Engelbart worked at SRI from 1957 to 1977, when it was called the Standford Research Institute. Carlson further states that "Doug's legacy is immense. Anyone in the world who uses a mouse or enjoys the productive benefits of a personal computer is indebted to him."

CNN reports that Engelbart's first mouse prototype was a simple wooden block with wheels and a tiny red button, as shown above. His mouse invention was patented in 1970, but that patent passed into the public domain in 1987. As you know, it was Apple that initially made the use of a computer mouse commonplace.

Engelbart won what is known as the "Oscar for Inventors" in 1997. This $500,000 Lemelson-MIT Prize is awarded to outstanding inventors who have developed a patented product or process that is of significant value to society. The Associated Press also states that in 2000, President Bill Clinton bestowed Engelbart with the National Medal of Technology "for creating the foundations of personal computing."

A testament to his innovations is Engelbart's 1968 demo of his mouse and video teleconferencing system to the Fall Joint Computer Conference in San Francisco. He gave the demo with a homemade modem, with his staff connected through his laboratory's infant online system.

Engelbart is survived by Karen Engelbart, his wife; his four children, and nine grandchildren. His work lives on through the The Doug Engelbart Institute, which was co-founded by and is under the leadership of his daughter, Christina Engelbart.

In this article: Apple, Douglas Engelbart, DouglasEngelbart, Mac, mouse
All products recommended by Engadget are selected by our editorial team, independent of our parent company. Some of our stories include affiliate links. If you buy something through one of these links, we may earn an affiliate commission.