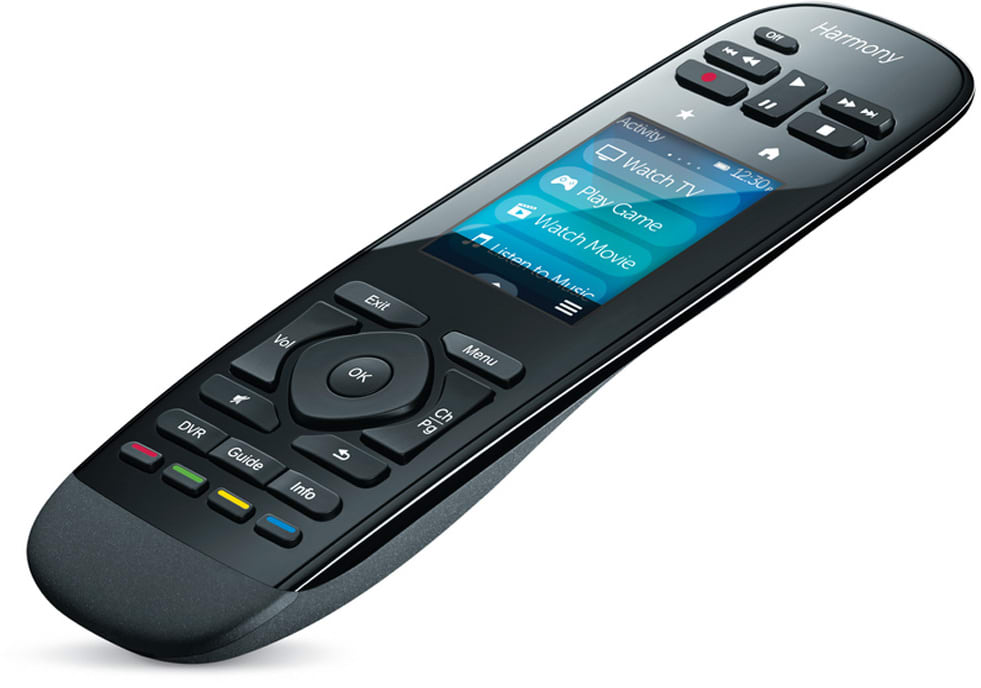 Until now, Logitech's Harmony line has been the name in user programmable remotes. Now the company's back with three follow-up products, and they differ enough from earlier models to warrant an explanation. Instead of using a programmable IR remote, the Harmony Ultimate, Harmony Smart Control and Harmony Ultimate Hub each offload the IR-emitting duties to a networked device, allowing smartphones and tablets to act as remotes too. Additionally, the Hub uses Bluetooth to control your game console. Ranging in price from $99 to $349, the lineup covers almost every budget, with the Hub sold as a standalone accessory for smartphones and tablets. Meanwhile, the Smart Control includes a simple remote, and the high-end Ultimate Hub swaps a basic remote for the Harmony Touch. How exactly might these enhance your home theater enjoyment? Read on to find out. The Hub is the greatest addition to the Harmony family to date. While it's still not the remote we dream of, it's easily the best user-programmable option available.

How would you rate the Harmony Ultimate?
We want to hear what you think. Post a quick review now to join the conversation!
Write a review

The common thread tying together these three products is the Hub. This small puck looks almost exactly like the Harmony Link, though a little less round. There's no dedicated power port, but it sports a micro-USB socket (instead of mini-USB) and a button on the back for pairing or resetting the device. The wall-wart-style external power supply connects via the same USB port that can be used to program the Hub via your computer. There's a single LED up front, which we didn't find distracting while watching TV, and it provides valuable feedback as to the state of the device, such as its connectivity and current activity.

Around back, there are only two ports for external IR blasters, but they aren't required as a pair of built-in IR emitters should be enough to control devices that have a line of sight to the Hub. Inside we have 802.11b/g/n, Bluetooth (currently only able to control the PS3 and Wii) and Logitech's proprietary Unity RF for two-way interaction with the Harmony Touch and the simple remote bundled with the Smart Control.

The addition of Bluetooth will be great for those who rely on their Bluetooth-controlled game consoles, like the PS3, but we really would've liked more options, including support for RS-232 for two-way control or optional sensors like power or video-out. These would raise the accuracy of macros by confirming the equipment's power status. Now it's true that IR is still the only truly universal home theater control protocol, but we don't think that's a reason to avoid supporting more. Also, we'd love to be able to control a TiVo or DirecTV Genie via IP, for example.

The success of Logitech's Harmony remotes has always been due to a combination of great hardware and easy programming. If you already love the cloud-based programmability of MyHarmony.com, then you still will. If you're frustrated by navigating wizards to edit settings and contacting support to load in discrete HEX IR codes, then that won't change either. The cloud approach to programming does lend itself well to the Hub lineup, though. It enables some great use cases, like no longer needing to plug the remote into your PC to make a change. In fact, other than firmware updates and configuring WiFi on the Touch remote, included with the Ultimate option, you'll never need to use the bundled USB cable. It also makes getting mobile devices up and running as simple as installing an app and logging in with your MyHarmony.com credentials.

Harmony remotes used to be programmed via a PC. You can still do that with this new lineup and indeed, some settings are only configurable that way. But, as you might expect, those touchscreens can also be used for programming. In fact, initial setup of the Smart Control is done via the mobile app, as is initiating a sync to update changes to the simple remote without tethering. A few of the customizations on the mobile app, like button placement, aren't only done from the app itself, but those specific changes don't sync beyond that device to others. This is great if you want the button layout on your device to be different from your housemate's, for example, but it requires some duplicate programming if you wish them all to be the same.

Each member of the trio has a few things in common: the Hub and the selection of iOS / Android apps. But the main difference between the three products is the remote. The Hub, at $99, is the choice for those who wish to completely ditch the physical remote and use smartphone apps exclusively. For that price, you get a network-attached IR blaster that also tracks states between multiple mobile devices. This state information ensures that if you're watching TV while using your phone as the remote and then leave the room, others can pick up their own phone and use it as a remote very easily.

The iOS app has a nice, clean look to it, and includes gestures for many key functions -- that can be configured to behave as you'd like. In addition, you can select your favorite channels and summon them by clicking on the network's icon. And of course, your traditional button controls are there for every device action you might need. Buttons can be removed or moved around to your liking, including mixing functions from various devices on a single screen. The only real limit worth mentioning is the inability to change the way the app looks. The colors are what they are and there's no apparent way to change some of the icons, like the ones used to kick off an activity. The real head-scratcher, though, is the lack of tablet-optimized applications. This is especially odd when you consider there's one for the Harmony Link, which doesn't work with the Hub. You can, of course, run the smartphone apps on tablets, but we all know how that goes.

Moving on, the Harmony Ultimate is essentially the $249 Harmony Touch remote bundled with a Hub. We won't give the Touch the full review that it deserves here, but we will say that you'll either love the fact that the physical buttons are pushed aside by the touchscreen, or you won't. The ability to press buttons for varying periods of time to trigger different functions makes up for the lack of quantity, to a certain degree, but it does make the whole thing feel less intuitive. The Harmony Touch will look better on your coffee table than the other options and includes a rechargeable battery, but at a premium. The other thing the Ultimate brings is an extra IR blaster and the ability to configure where the IR is emitted from: from the Hub's built-in emitters, the wired ones or directly from the hand-held remote. Setting it to emit from the remote does undermine the mobile apps, however.

The last variation is the Harmony Smart Control, and indeed, we saved the best for last.

The last variation is the Harmony Smart Control, and indeed, we saved the best for last. The included simple remote makes us confident that only current owners of the Harmony Touch will opt to pay $30 less for the Hub by itself. The remote is thin and well-built, like you'd expect from a Harmony. It uses an included coin-type battery that we're told we can expect to last a year. There are only three activity buttons at the top, but you can kick off six functions thanks to its ability to recognize both short and long presses. Like all Harmony remotes, it features a discrete off button that we still don't think is intuitive. But it's easy enough to get used to -- though don't confuse "easy to learn" with "easy to use." All the main buttons are here, but no extras are available to match your DVR or another box's special keys (like discrete page up and down, or live TV). The only gripe worth raising is the combined fast-forward / rewind and skip forward / back buttons. The default is to fast-forward / rewind with a momentary press and skip forward / back with a long press, but this is easily swapped. Annoying and unintuitive? Yes. Unworkable? Not at all.

No matter which you choose, the real beauty of the Hub is how it keeps the remotes working together. Want to walk in the house and hit "watch TV" with the hand-held remote sitting on the coffee table and then do the rest from your phone? No problem. The mobile apps launch quickly and pick up where the physical controls left off, and vice-versa. The way it should work. The only part of this multiple-remote bliss that could be easier is switching between Hubs and supporting more than one physical remote. For example, transferring between the living room Hub and one for the bedroom with the Harmony app for iPhone requires four button presses.

The Hub is the greatest addition to the Harmony family to date. It's a game changer for the user-programmable remote space, and it's what the Harmony Link should've been. The price isn't crazy, but it's not exactly a great value either. So while we do recommend the Hub to anyone with a compatible smartphone, the solution is far from perfect. First off, we wish it weren't limited to IR and Bluetooth -- but we've been saying that for years. Two-way control options would greatly enhance the user experience, as would a faster and more reliable protocol.

The other item at the top of our wish list is a documented network API for third parties to interface with the Hub. The included apps are great and all, but there are lots of other solid applications out there that could really enhance our home theater experience, if they only had some control over our living room. This would also make it possible for other home automation controllers to integrate with the equipment. So no, this isn't the home theater control solution we've been dreaming of, but at the very least, it's a big step forward.

In this article: android, Harmony, HarmonyHub, harmonysmartcontrol, HarmonyUltimate, hdpostcross, iOS, Logitech, remote, RemoteControl, review
All products recommended by Engadget are selected by our editorial team, independent of our parent company. Some of our stories include affiliate links. If you buy something through one of these links, we may earn an affiliate commission.