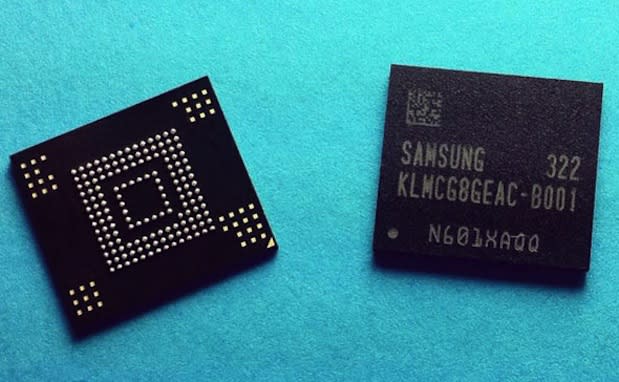 The evolution of mobile memory chips keeps moving faster, if Samsung's progress is any indication. Not eight months since churning out those speedy eMMC 4.5 chips, and the company's next version of NAND is already here. Indeed, the South Korean company says it's now in mass production of what it deems as the world's fastest embedded memory. The new eMMC PRO chip is based on 64GB 10nm class NAND flash technology and would be the first to support the eMMC 5.0 standard. The chips will be available in the usual 16, 32 and 64GB iterations and feature an interface speed of 400MB/s. The 32 and 64GB densities in particular boast random read and write speeds of 7,000 IOPS (inputs/outputs per second) and sequential read and write speeds of 250MB/s and 90MB/s respectively. What do all of those numbers mean? Well, they should translate to much better performance when it comes to multitasking, browsing, file transfers, HD video capture, gaming and just general computing. Combined with the firm's upcoming Exynos 5 Octa 5420 SoC, and we're champing at the bit to see them implemented in Samsung's next generation of mobile devices.

Featuring an interface speed of 400 megabytes per second (MB/s), the lightning-fast eMMC PRO memory provides exceptionally fast application booting and loading. The chips will enable much faster multi-tasking, web-browsing, application downloading and file transfers, as well as high-definition video capture and playback, and are highly responsive to running large-file gaming and productivity applications.

As the fastest eMMC devices at more than 10 times the speed of a class 10 external memory card (which reads at 24MB/s and writes at 12MB/s), the new mobile memory greatly enhances the movement from one application to another in multitasking activities.

Samsung's 16GB, 32GB and 64GB eMMC 5.0 devices come in 11.5x13mm packages, making them ideal for mobile devices where space on the printed circuit board is extremely limited.

In this article: emmc, emmc5.0, emmcpro, flashmemory, memorychip, samsung
All products recommended by Engadget are selected by our editorial team, independent of our parent company. Some of our stories include affiliate links. If you buy something through one of these links, we may earn an affiliate commission.