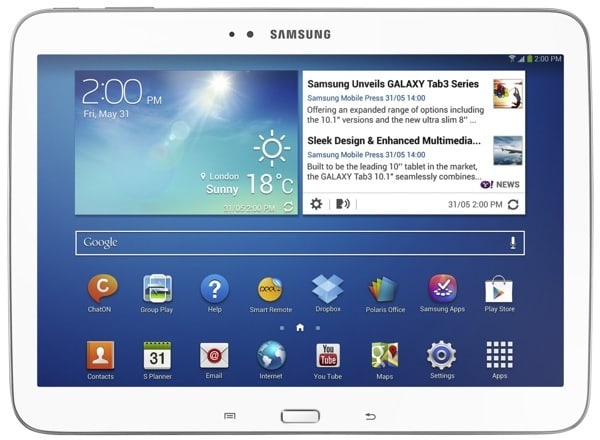 Samsung confounded us last year when it released the Galaxy Tab 2 10.1 as a virtual reissue of the original, bumping up the Android version, removing the LED rear camera flash and rearranging the dual speaker placement. So what's new in the Galaxy Tab 3? Nothing much, it turns out. You've got the same 1,280 x 800 display, 1GB of RAM, 16GB of internal storage and IR blaster as on the last-gen model, although the processor has been swapped for a dual-core 1.6GHz Intel Z2560 running Android 4.2.2 Jelly Bean. So where do we go from here? How do we judge a tablet refresh that's merely pretending at being an update? We live with it for a bit, use it as a stand-in for our TV remote, e-reader and primary source of streaming media consumption, that's how. Read on as we dissect the $399 Galaxy Tab 3 10.1 to find out if it's worth the fuss. The refreshed Galaxy Tab 10.1 is stuck in the past. Its specs, mostly unchanged from last year's model, make this a forgettable product. At this price, you're better off looking elsewhere.

How would you rate the Galaxy Tab 3 10.1-inch?
We want to hear what you think. Post a quick review now to join the conversation!
Write a review

Is it laziness that prompted Samsung to copy and paste the Galaxy Tab 2's spec sheet? Or is this a case of settling for "good enough" on a mid-range product? We'd hazard it's a little bit of both. With the Galaxy Notes taking over as flagships in Samsung's tablet lineup, the Tab series has become more middle-of-the-road. The Tab 3 10.1 has a 1,280 x 800 TFT LCD display that's not going to knock anyone's socks off, but it's not entirely lackluster either. If there's any immediate knock to the GTab 3 10.1's overall performance, we'd say it's that paltry memory allotment, but more on that later.

The overall design of the GTab 3 10.1 lends itself better to prolonged usage. At 1.12 pounds (510g), it's significantly lighter than its 1.29-pound predecessor and it's about 2mm slimmer, too, measuring just 7.95mm thick. There are no hard edges or sharp right angles to dig into your palms while you watch TV, sip your coffee or stare slack-jawed at video on your morning commute. Even the faux-chrome edges bordering the display have been minimized, which means the bezels are narrower as well, especially on the shorter ends. If you're like us, you'll need to get used to keeping your thumbs hovering just above the display or blocking a tiny portion of the screen; it used to be easy to rest your fingers on that ring of plastic.

The front face is little changed from the GTab 2 10.1: Samsung's moved its logo to the top border of the screen, placing it next to the 1.2-megapixel camera. Down below, the company's imported the home button oft-seen on its Galaxy S smartphones. That's flanked by capacitive keys for menu access and backward navigation. The ports and physical hardware keys -- power, volume rocker, microSD and IR blaster -- are mostly relegated to the top edge, with the sole exception being the micro-USB port at the base. The speakers, much like on the 2012 Tab, are positioned on the top side, but in this case they've been shifted to the edges, so sound won't be aimed directly at your face.

Around back, the Galaxy Tab 3 10.1 is mostly a sea of unblemished brown plastic. And yes, it features that subtle cross-hatching we've seen spread across Samsung's latest Galaxy flagships. The only adornments here are the Samsung logo, FCC certification at the bottom and a 3-megapixel module sans LED flash at the top. The back cover, as you might've guessed, is non-removable. Neat freaks and the otherwise OCD-inclined will want to keep a cotton cloth nearby to wipe down the device; this glossy backplate serves as a great reminder that we humans are an oily bunch.

It's a pity the Galaxy Tab 3 10.1 doesn't sport a full HD display: its 1,280 x 800 resolution is better suited to its 8-inch sibling, if only for the increase in pixel density you'd get on a screen that size. Here, its TFT LCD is mediocre, giving way to fuzzier-looking icons and a reduced crispness. Viewing angles are okay, but outdoor use could pose a problem given how glare-prone the screen is. That said, we happily sat through an episode of Orange is the New Black on Netflix and found no faults with the display's color reproduction. But if you're going to depend on the dual speaker setup, you'll want to max out the volume and situate yourself in a relatively quiet space. They're just not that powerful.

The Galaxy Tab 3 10.1's high sticker price should mean it packs in loads of bells and whistles, including, perhaps, a better camera, but it doesn't. The 3-megapixel main shooter is serviceable: colors are balanced and images are sufficiently detailed, though you won't be able to set focus. It's adequate enough to capture action shots from the sidelines (sorry, no burst mode), but it's not something we'd recommend relying on for your next round of vacation photos. The UI is straightforward too and doesn't confuse users with an abundance of settings options. You have the ability to add a filter, toggle exposure / white balance and swap to different scene modes. But for the most part, auto mode is good enough. Video recording is much the same and maxes out at 720p. Again, the GTab 3 10.1 shouldn't be your go-to for any memories in the making. It's a decent fallback option, but nothing more. Samsung's bag of tricks are mostly absent on the Galaxy Tab 3 10.1 -- only Smart Stay and Smart Orientation make the cut. This feature load's a little lighter than we've seen in the past, owing to the fact that most TouchWiz innovations now belong to the Note line. This time around, the company's giving us its typical skinned take on Android 4.2.2 Jelly Bean, but mercifully the bloat is minor. Somehow, the company managed to avoid homescreen overcrowding on the GTab 3 10.1; it only opted to only fill one primary screen with widgets and select apps, while leaving the remaining two free.

A deeper dive into the UX reveals some subtle tweaks on Samsung's part, like the ability to access the Play store simply by tapping the menu capacitive key within the app drawer. There's also an option in settings to enable what's called Blocking Mode, which allows users to mute notifications and even set specific parameters for when this can occur (for example, disable alerts at nighttime). And for those of you who have a need to handle your tablet while you drive, Samsung's included a Driving Mode to give you robo-voiced alarm and schedule alerts so you can keep both hands on the wheel.

Samsung might want to rethink the chipset inside this Galaxy Tab. As you'll note from the above comparison chart, the GTab 3 10.1 delivers a mixed bag of results when stacked against the competition (both old and new). To be fair, it trounced last year's model in nearly every benchmark, but when we pit it against Lenovo's IdeaTab S2110 (another 10-incher with similar resolution) it just couldn't compete.

Meanwhile, we're not sure whether we should chalk this up to that Intel CPU or the decrease in RAM, but everyday performance on the Galaxy Tab 3 10.1 is also inconsistent. There were more than a few occasions when typing proved frustrating; when the flow of text would freeze and then stutter out. The same uneven experience also bleeds into the tablet's poor touch recognition, which had us jabbing at the screen repeatedly until our finger presses registered.

With a 6,800mAh battery sealed beneath its ugly brown shell, the Galaxy Tab 3 10.1 is designed to last and last. In all of our time with the tablet, battery life was never a concern. Left to idle with slight to moderate usage, the GTab 3 10.1 can easily last about a week. We still had a charge on our unit that was just below half capacity at four days in and that's without the battery-saving mode turned on. Still, on our more rigorous battery rundown test, the tablet yielded a result of six hours and 55 minutes. That's a big drop from last year's model, which made it almost to the nine-hour-mark -- unsurprising, we suppose, since the GTab 2 had a bigger 7,000mAh battery.

Four hundred dollars is a tough asking price for a tablet that hasn't changed much from its last generation. For about $70 less, you can take home 2012's Galaxy Tab 2 10.1 and enjoy the same 1,280 x 800 resolution, dual-core experience, camera setup and 16GB internal storage allotment. If your search for a mid-range Android tablet has you looking outside of Samsung's Galaxy lineup, there's Lenovo's IdeaTab S6000 to consider. It matches up with a similar resolution, storage configuration and adds in a quad-core CPU for nearly $100 less at $319. Or you can go the Toshiba route with the 10-inch Pure. It skimps on overall specs -- there's no rear camera and uses the now-dated Tegra 3 -- but it otherwise matches the GTab 3 10.1 with a lower price of $299. For something more current, you might want to shift attention to Sony's stunner, the Xperia Tablet Z. At $499, it's definitely a higher-end option, but for the money you're getting a water- and dust-proof device, quad-core CPU, 2GB RAM and a full HD 1,920 x 1,200 display.

Nothing ever really changes when it comes to Samsung's 10.1-inch Galaxy Tab. The Tab 3 10.1 is proof positive of that. This 2013 iteration is a parallel move for the line that attempts to mix up the package of mid-range specs with a terrible brown plastic coat. In a pinch, it'll do what you need it to adequately: stream video, serve as a widescreen browser and e-reader and hub for all your social communication needs. It just won't look pretty doing it, nor will it dazzle with brisk performance -- in fact, you should expect some stuttering. The Galaxy Tab 3 10.1 excels in mediocrity, but for the money you can take a step back in time (and dollars) for the same-y GTab 2 10.1 or resign yourself to paying a little more for something better.