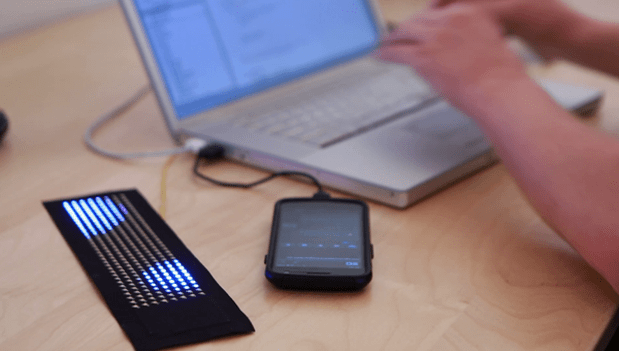 Light-up clothing is all the rage, and a company called Erogear is upping the ante with Fos, a Bluetooth-enabled solution for style-conscious athletes. The brainchild of engineer Anders Nelson, Fos is a lightweight, Velcro-lined fabric strip of lights with a nifty customizable display. What sets it apart from Erogear's other wearable options is the fact that it's controlled by your mobile phone. The LED grid can be programmed to double as your very own turn signal (useful for nocturnal bike-riding), advertise sponsors or even brag about how many calories you've burned while running. Coming it at around 32 grams (roughly the weight of a golf ball), this illuminated patch packs an LED matrix driver, 32-bit microprocessor, flash memory and a power supply in its 2mm profile. The Kickstarter campaign is offering a choice of three designs to backers: an 11 x 3 inch strip, an 11 x 5 inch version and a black leather belt for those times you feel like literally shining at the club. Though the demo package is currently Android-only, iOS and desktop versions are potentially on the horizon. A pledge of $125 will net you your very own Fos kit, and units are scheduled to start shipping in February of 2014, provided the campaign hits its $200,000 goal. To learn more, check out the video after the break or follow the source link to Kickstarter.

In this article: AndersNelson, bluetooth, Erogear, Fos, insertcoin, kickstarter, LED, video, Wearable
All products recommended by Engadget are selected by our editorial team, independent of our parent company. Some of our stories include affiliate links. If you buy something through one of these links, we may earn an affiliate commission.