LG unveils A530 3D gaming laptop, tours the world to showcase its wares 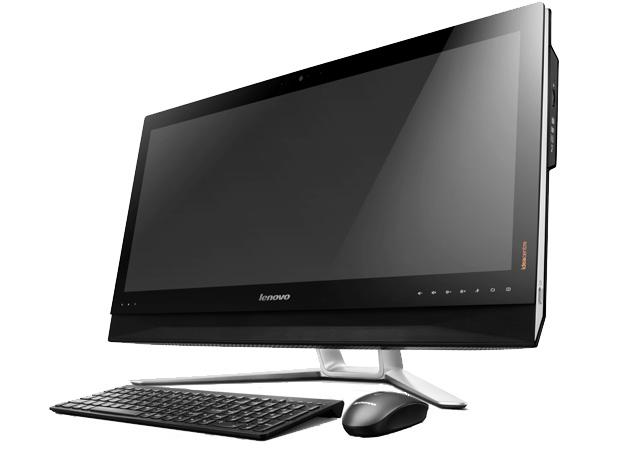 Lenovo is known for all-in-one PCs that stand out, and that's certainly true of a new four-model update to the company's IdeaCentre line. The headlining B750 is reportedly the first PC to include a 29-inch, 21:9 aspect ratio display; its 2,560 x 1,080 panel is potentially ideal for both movie aficionados and multitaskers. Lenovo appropriately equips the B750 with a 2.1-channel JBL audio system, and gamers may like the combination of Haswell-based processors with standard GeForce GTX 760A graphics. The system ships in October with a $1,199 base price.

Don't need an extra-wide screen? Don't worry -- Lenovo's other three introductions may catch your eye. The A530, B350 and B550 improve on their predecessors with both Haswell chips and options for 1TB hybrid hard drives that combine speed with capacity. These smaller IdeaCentres should arrive alongside the B750 in October, with prices ranging from $799 for the 21.5-inch B350 to $1,199 for the 23-inch B550. RESEARCH TRIANGLE PARK, N.C. – September 30, 2013: Lenovo (HKSE: 992) (ADR: LNVGY) today announced several new additions to its growing family of all-in-one (AIO) desktop computers. Led by the super-widescreen Lenovo B750, which delivers the world's first 29" 21:9 display, the new devices aim to extend Lenovo's leadership in the competitive AIO segment. According to the latest rankings from IDC, Lenovo is #1 in the worldwide consumer AIO market and the worldwide AIO market overall. There are four models in the new range, all equipped with stunning IPS displays, including three B-series PCs and, the Lenovo A530, a slim, space-saving addition to Lenovo's AIO range.

"AIO desktops have become the first-choice option for many consumers seeking a home PC with power and flexibility," said Jun Ouyang, vice president and general manager, desktop business unit, Lenovo Business Group. "Whether as a home entertainment center, a desktop for productivity or a gaming and multimedia device, we believe an AIO should adapt to our customers' needs quickly and smoothly and offer them a level of performance on par with a traditional desktop."

"The transformation of the home desktop PC continues. Thanks to stylish, space saving, all-in-one desktops like those being introduced by Lenovo and powered by the latest high performance Intel® Core™ processors, are quickly becoming the media, productivity and entertainment centers of the home," said Lisa Graff, Intel Vice President and General Manager, Desktop Client Platform Group.

The Lenovo A530 AIO desktop is a slim, space-saver that sports a widely adjustable screen, which tilts from -5⁰ to 90⁰ allowing use as a traditional PC or as a flat, table PC using the device's 10-point multi-touch display for games and entertainment. The 23" Full HD (1920x1080) 16:9 IPS, wide-view display measures only 0.8in/21.5mm thin, at its thickest point, and retains its low-profile even when folded flat on top of the 1.3in/32mm base. The entire device is clad in an all-aluminum chassis for strength and style. The combination of wide viewing angles, a fold-flat screen with multi-mode functionality and its slim profile make the A530 an ideal productivity desktop which can morph into a family entertainment and gaming center with a simple push.

The Lenovo A530 is powered by an up to 4th generation Intel® Core™ i7 processor which provides plenty of power to handle multimedia and games. For storage and sharing, users can choose up to 8GB DDR3 memory, up to 1TB HDD or 1TB SSHD storage with integrated 8GB SSD cache and take advantage of the A530's full range of connections including integrated Bluetooth, Wi-Fi, 6-in-1 card reader and HDMI in/out ports for connecting to other devices. With an integrated DVD reader-writer or Blu-Ray Disc™ and Dolby® certified speakers, keeping up to date with the latest movies and games is convenient as well. The A530 comes loaded with several thoughtful enhancements including the Lenovo Rescue System for file backup, restoration and recovery and the Lenovo Eye Distance System which helps reduce eye strain.

The Lenovo B750 looks distinctive right out of the box, with a 29" Wide Full HD (2560x1080), 21:9 super-widescreen, frameless display supporting IPS wide-view technology, perfect for viewing movies and videos. The viewing experience is further enhanced by the inclusion of a JBL® designed 2.1 speaker system with built-in 20W subwoofer and Dolby® Home Theater®. Lenovo includes other enhancements to optimize the super-widescreen display including Lenovo Split Screen, allowing users to view and work with multiple windows simultaneously and Lenovo Eye Distance. The Lenovo B750 packs up to a speedy 4th generation Intel® Core™ i7 processor and powerful NVIDIA® GeForce® GTX760A 1GB graphics as standard.

The Lenovo B750 is highly adaptable and expandable, and functions equally well as either a powerful PC or multimedia center. With an integrated DVD reader/writer or Blu-Ray Disc™ drive, a wide range of connection options including integrated Bluetooth 4.0 (optional) and Wi-Fi, a 6in1 card reader and optional HDMI out/in (optional) ports, the system makes it easy to manage and access photos, videos, music and more with the added convenience of Lenovo Motion Control which simplifies common tasks using instinctive hand gestures. The space-saving system is unobtrusive at just 11.73 in/298mm thin, while slide open rear panels make expanding memory and storage simple.

As the latest mainstream additions to the B-series AIOs, the Lenovo B550 and Lenovo B350 pack high performance desktop components into an all-in-one form factor. They also offer a number of features to suit customer demands for devices that can serve readily for entertainment and productivity as well as gaming. They both sport Full HD (1920x1080) IPS, 16:9 widescreen displays with the B550's 23" frameless display slightly larger than the 21.5" display on the B350. Both devices couple their displays with integrated stereo sound and Dolby® certification, while the B550 adds Dolby Home® Theater® to its JBL®-designed speakers for outstanding audio performance. For gamers and enthusiasts alike, both devices are easily expandable using the sliding back covers for access. The devices are both powered by up to 4th generation Intel® Core™ i7 processors and have 16GB DDR3L memory and up to 2TB HDD storage or SSHD hybrid storage. Integrated Wi-Fi and Bluetooth, optical drives and a wide range of connectors including HDMI out round out the package ensuring that the B550/B350 perform well for most entertainment and productivity needs.

In this article: a530, all-in-one, b350, b550, b750, desktop, ideacentre, lenovo, windows8
All products recommended by Engadget are selected by our editorial team, independent of our parent company. Some of our stories include affiliate links. If you buy something through one of these links, we may earn an affiliate commission.