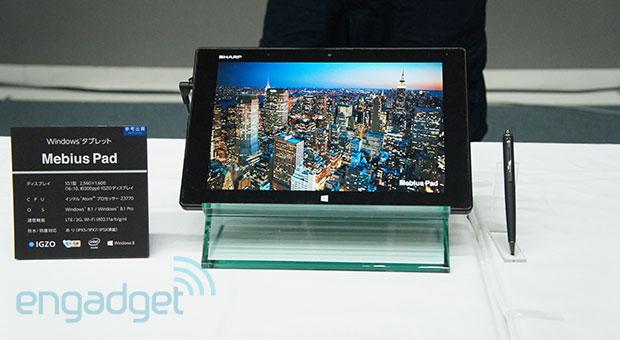 Kicking off this week's CEATEC show in Japan, Sharp has played to its strengths with its new Windows 8 tablet, the Mebius Pad, factoring in a 2,560 x 1,600 resolution display. That puts it pretty far ahead of the current crowd of 1080p Windows 8 tablets, including Microsoft's incoming Surface 2, although we admit, we'd have loved to have seen another incredible 4K tablet. Regardless, that's the highest resolution Windows 8 tablet we've seen yet. Alongside the company's 10.1-inch IGZO panel (known for their low-power credentials), the Mebius Pad runs on a slightly less-exciting Intel's latest Atom Z3370 SoC (codename Bay Trail). The basic Windows 8.1 model will arrive with Office for free, although you'll have to pay extra if you want it for the Pro edition. Also, following Japanese trends for practically any device, the slab is both water and dust-proof (it's in the midst of being certified for IPX5, IPX7, IP5X), while you'll be able to buy it with LTE radios on board, at least for Nippon, as the device is unlikely to leave Japanese shores once it launches in early 2014.

Unsurprisingly, in the flesh the screen looked good -- Sharp even provided a magnifying glass so we could get up close to those pixels. The 10.1-inch display is also satisfyingly bright -- if we're honest, it's unusual to see such a capable screen powered by an Atom processor. The tablet is headed towards business use (which explains the optional stylus) and the extra resolution found on Sharp's first Windows 8 tablet means there's more space for your spreadsheets and documents. The hardware itself is suitably thin and light, with the rear of the device bearing a passing resemblance to recent Sony hardware -- possibly due to the understated camera lens in the corner. We'll let you know if Sharp has plans to offer the tablet to global business types. In this article: 2560x1600, ceatec, ceatec2013, hands-on, IGZO, mebiuspad, sharp, windows8, windows8.1
All products recommended by Engadget are selected by our editorial team, independent of our parent company. Some of our stories include affiliate links. If you buy something through one of these links, we may earn an affiliate commission.