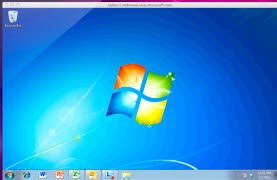 In a press release announcing a new wave of enterprise cloud solutions for the fall, Microsoft has (perhaps inadvertently) let it be known that its Remote Desktop client will be coming to iOS later this month. Microsoft has long made its Remote Desktop client for OS X, but in discussing its new enterprise cloud solutions and Remote clients for the upcoming release of Windows Server 2012 R2, Microsoft wrote this little gem:

The proliferation of cloud applications, data and consumer devices is moving many enterprises to a bring-your-own-device model. The new release of Windows Intune, also available Oct. 18, combines with System Center Configuration Manager to help IT departments give mobile employees security-enhanced access to the applications and data they need on the Windows, iOS and Android devices of their choice. This unified management environment for PCs and mobile devices complements the new access and information protection capabilities in Windows Server 2012 R2.

Further, with Windows Server 2012 R2 Microsoft is introducing the Microsoft Remote Desktop app, available for download in application stores later this month, to provide easy access to PCs and virtual desktops on a variety of devices and platforms, including Windows, Windows RT, iOS, OS X and Android.

While a Microsoft Remote Desktop client might not excite the majority of iOS users, it is good to see the company being more open to supporting iOS. Just yesterday it was announced that Office for iPad is officially in the works.

In this article: iOS, microsoft, remote desktop, RemoteDesktop
All products recommended by Engadget are selected by our editorial team, independent of our parent company. Some of our stories include affiliate links. If you buy something through one of these links, we may earn an affiliate commission.
Share
Tweet
Share
Save