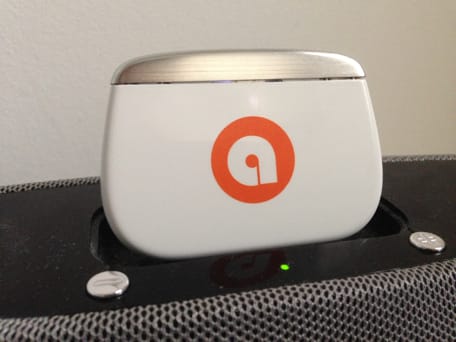 As Apple devices rapidly migrate to Lightning cables, you may have a few 30-pin docks with speakers around. While you could use something like Airfoil Speakers (a great app, I might add) to push sound around, attaching a US$300-plus device to an old dock seems excessive. Enter the Auris Skye -- a small device with built-in WiFi and a 30-pin connector that will allow you to set up your dock as an AirPlay speaker.

The Skye itself is much smaller than an iPod touch, and surprisingly light. It needs no battery, and has one LED on top to indicate whether it is broadcasting or not. White means yes, orange means no. Setup requires attaching the Skye to a dock, waiting for the white LED to stop blinking, then using an app to finish setup. If the LED blinks orange, or the Skye's WiFi can't be found, you'll have to reset the device using a paperclip. More on this in a moment, as I feel it's one of the only issues with this product, but it's not always the product's fault.

The Skye broadcasts its own WiFi, so you'll go to Settings and "join" its network, then launch the Skye app to complete setup. Once you've joined, it's a pretty simple matter of a few taps to get things going. Like a Sonos device, you can set up a Skye for the living room, bedroom, etc. and use labels to keep track. Once you find the Skye (which can take several minutes or a few restarts with a paperclip), you'll need to attach its WiFi to your home WiFi, then you're off to the races. 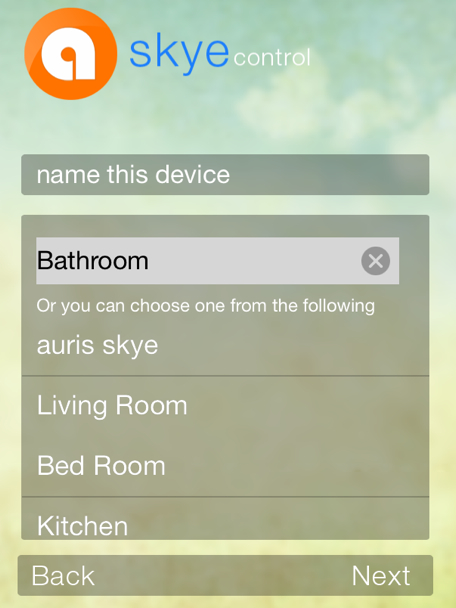 From there you can close the Skye app and you'll see the device listed in your AirPlay options. That is, if it sticks. Unfortunately I had problems with the test unit I received. While the LED light indicated it was connected, for some reason the Skye would drop out and I had to reset, wait for the white light to stop blinking (about two minutes), and walk through the entire setup again. And again. And again.

Part of this isn't really the device's fault, because if you change channels on your router or it reboots for any reason, the ad hoc network will break. Dropping out moments after setup, however, is a problem. I'm hoping it was more a concern with the prototype and that shipping units will be more reliable.

In any event, the Auris Skye is a nice idea and it got plenty of funding during its Kickstarter run. Now you can pre-order one on the Auris site for $73.99 or get two for $139.98. Auris has a good return policy, so if you're having problems as I was, at least there's that.

In this article: accessories, airplay, auris, features, home, music, review, skye
All products recommended by Engadget are selected by our editorial team, independent of our parent company. Some of our stories include affiliate links. If you buy something through one of these links, we may earn an affiliate commission.