Battlefield 4 drops players into a sandbox and unhooks all tethers, loosing scores of soldiers to squad up and take down the opposition however they choose. The series' trademark, free-form multiplayer is reinforced with some smart albeit incremental upgrades, giving players even more incentive to work together. That in itself isn't terribly surprising; multiplayer has always been Battlefield's bread and butter.

What is surprising is that developer DICE has crafted a competent campaign to go along with it.

Battlefield 3's campaign highlighted rote shooting and a generic story punctuated by soldiers whose zest for combat was equaled only by their lust for profanity. Battlefield 4's campaign attempts to present a more relatable story of a squad perpetually stuck between a brilliantly-rendered rock and a slow-motion explosion. The campaign centers around Admiral Chang, an absentee villain in the midst of inciting a civil war in China. Chang convinces the military that Jin Jie, a local politician advocating peace and free speech, was killed by the United States. Chang enlists Russia's aid in his coup and the makings of a modern military drama are born.

Call of Duty's influence on Battlefield 4's campaign is palpable. The campaign is a string of fantastic scenarios from one moment to the next. The five-hour jaunt sees you narrowly escaping death while falling through a collapsing building, surviving an EMP blast in downtown Shanghai, downing enemy fighter planes in a vicious dogfight and hitching a ride on a plane via a skyhook. There's even one especially explosion-fueled moment when you climb a massive dam, lace it with C4 and bring the whole thing crumbling down.

The campaign never languishes and offers a few surprises. While it's odd that you never come face-to-face with Chang or have a big climactic showdown, the majority of the campaign's scenarios and narrative provide a thoroughly enthusiastic adventure that makes up for Battlefield 3's lackluster single-player. 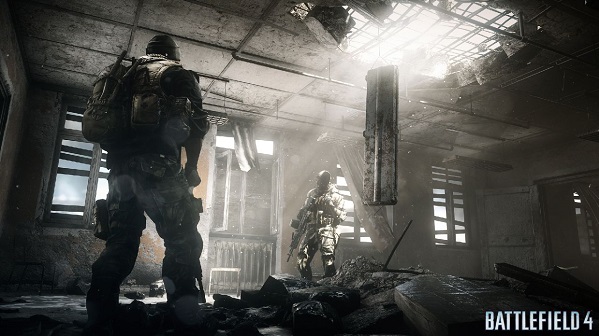 As dizzying and volatile as Battlefield 4's campaign is, there are a few rough edges. The constant waves of enemy AI flushed into the various sandbox encounters are entirely scripted, and their ability to avoid your crosshairs leaves a lot to be desired. Thankfully the addition of a light tactical layer, which allows you to order your squad to suppress and engage individual targets, opens up flanking opportunities and provides just enough variety to these scripted sequences. Unfortunately, the distance between checkpoints in some of the larger skirmishes can become a problem in later levels full of enemy vehicles.

Even with these flaws, Battlefield 4's campaign manages to be far more entertaining than Battlefield 3's bland military affair, and it's clear that DICE learned has learned a lesson or two since 2011.

Multiplayer, unsurprisingly, remains the main draw, presenting a new iteration of DICE's large-scale combat anchored by incremental improvements focused on better squad play. Players assume one of four classes and battle across ten maps, each tailoring itself to the specific mode being played. For example, Hainan Resort, a map composed of a series of tropical islands, will only open up a portion of itself for matches of Squad Deathmatch or Domination, but all of its many islands are utilized when playing Conquest and its 64-player PC variant, Conquest Large.


One of the more obvious changes is that squads can now accommodate five members instead of four. More important to fostering team tactics is the new Field Upgrade system. Each class has a handful of Field Upgrades they can choose from. During any given match, as you perform actions within the squad – things like giving your buddies ammo or reviving fallen squadmates – you'll climb the Field Upgrade ladder and unlock four different skills catering to a certain play style.

For example, as a match progresses and more squad actions are completed, the Engineer's Anti-Tank tier will unlock additional mines and rockets while reducing explosive damage taken. The Combat Medic upgrade path increases sprint speed, decreases Defibrilator charge time and even unlocks a skill that allows friendly vehicles to heal nearby comrades. It's not a revolutionary system, but it's enough to emphasize teamwork and add a new wrinkle to an already strong multiplayer suite.

The many multiplayer modes of Battlefield 4, which include returning favorites like the flag-capturing Conquest and asymmetrical attack mode Rush, are headlined by Obliteration. This new mode has two teams duke it out over a bomb and attempt to deliver it to one of a handful of objectives. Once the enemy team's objectives have all been destroyed, victory is achieved. 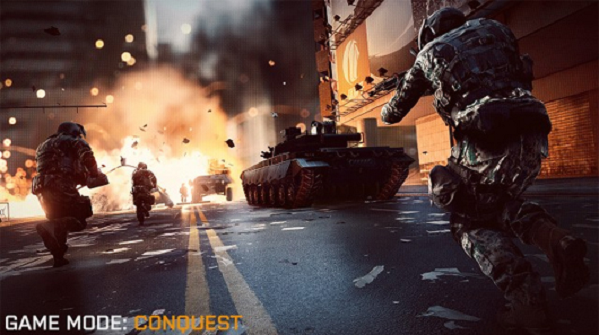 Obliteration feels like an intense tug-of war. The bomb is dropped into the middle of the map and only through concerted and coordinated effort can its explosive payload be delivered. The downside is that one of my many matches resulted in a forty-minute stalemate, with both teams pushing the bomb toward each others' base only to have it repelled right back. At launch, it's impossible to impose a time restriction on Obliteration. Still, when playing with a coordinated team, Obliteration offers an intense ebb and flow that's fresh to the series.

Battlefield 4 also marks the return of Commander mode, a top-down RTS-light variant, where players who have reached the rank of 10 can aid their team through weapon and vehicle drops, EMP blasts that disrupt enemy radar and cruise missile strikes that will level anything caught in the blast zone. Commander mode has been absent in recent Battlefield games, and it's a welcomed addition here. Commanders can put in work either through Battlefield 4 proper or via a tablet app – the latter being an especially intuitive way to order squads toward attack points thanks to a simple touch-and-drag control setup.

The final leg of multiplayer is EA's cringe-worthy buzzword, Levelution. Put simply, all maps have some kind of interesting and exploitable environmental hazard. In Siege of Shanghai, a skyscraper can be toppled; in Paracel Storm, a chain of tropical islands, a storm rolls in and a large military ship crashes onto the shore. Flood Zone features a levee that, once destroyed, floods the entire war zone and pushes infantry toward the rooftops of the sprawling downtown locale.

Levelution often feels more like window dressing than an impactful mechanic, and it works better in some levels than it does in others. The events in Flood Zone and Siege of Shanghai, for example dramatically affect the dynamics of play. When Flood Zone's levee breaks and drowns the city, soldiers are forced to swim on the ground level, making them vulnerable to fire from the rooftops. Bringing down the skyscraper in Siege of Shanghai hampers visibility with a thick coating of dust in the air. Meanwhile, there are weaker interactive elements like scattered IEDs players can trigger in Golmud Railway, or a semi-collapsible hotel in Hainan Resort. It's impressive to watch the US destroyer slam into the shore in Paracel Storm, but it doesn't really do much to change gameplay.

Levelution aside, each of Battlefield 4's ten levels feel massive - especially on PC. Not only are these maps truly beautiful – Battlefield 4 has some of the best lighting I've ever seen – but they're also far more destructible than the war zones of Battlefield 3. Taking part in a 64-player match across the sprawling Hainan Resort, watching jets strafe and battle in the skies while boats assault beaches and tanks level condos is awe-inspiring.

Sadly, the same can't be said for the Xbox 360 and PS3 versions, which limit maps to 24 players each. Playing a match of Conquest often feels like a traipse through a ghost town in search of the next guy to shoot. The current-generation console versions of Battlefield 4 are also hampered by short draw distance, texture pop-in and a 30 frames-per-second presentation. Between the Xbox 360 and PS3 versions, the latter suffered from a much more sluggish frame rate and even some animations like reloading were inconsistent. The game would recognize I reloaded by placing a new clip in my gun but my soldier didn't go through the motions. The Xbox 360 and PS3 offerings maintain the solid core gameplay of Battlefield 4, but the gap between PC and current-gen consoles is definitely starting to show.

Ultimately, Battlefield 4 successfully piles more content onto its excellent multiplayer while adding just a hint of innovation through Commander mode and Field Upgrades. The single-player campaign, while suffering from a dearth of checkpoints in some missions, does a good job of entertaining throughout its brief conflict, trading in the abysmal dreck that was Battlefield 3's story for high-energy spectacle.

The main draw for the Battlefield series has always been the chaotic camaraderie of its multiplayer, and that's no different here. But the sum of Battlefield 4's parts shows that DICE is capable of more. Not only has the developer iterated on and progressed its marquee multiplayer, it's provided a tight and cohesive campaign that is everything a military shooter needs to be.

This review is based on PC review code, retail Xbox 360 and retail PS3 code provided by EA. The majority of the reviewer's time was spent on the PC version. The majority of PC multiplayer time was conducted at EA's Redwood Shores office on private EA servers, though public matches on PC, Xbox 360 and PS3 were sampled over the last few days in the reviewer's home environment.

Joystiq's review scores are based on a scale of whether the game in question is worth your time -- a five-star being a definitive "yes," and a one-star being a definitive "no." Read here for more information on our ratings guidelines.
In this article: battlefield-4, dice, ea, microsoft, pc, playstation, ps3, xbox, xbox-one
All products recommended by Engadget are selected by our editorial team, independent of our parent company. Some of our stories include affiliate links. If you buy something through one of these links, we may earn an affiliate commission.