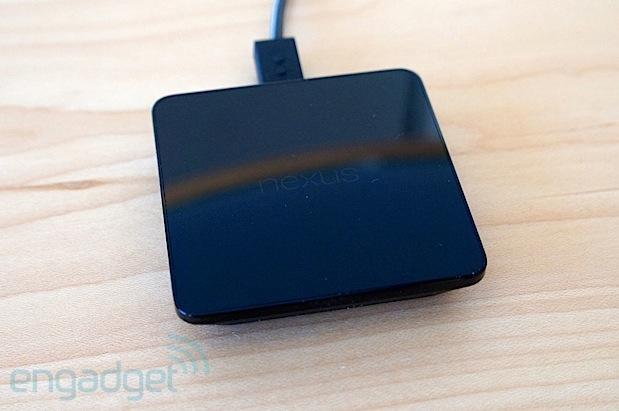 Last year, Google unveiled a new wireless charging pad alongside the Nexus 4 and Nexus 10, and the company has taken advantage of 2013 to come up with another one. This new charging pad has been announced in tandem with the Nexus 5, and will include support for it and the Nexus 7. It's supposed to go on sale in the Play Store today, though pricing is still an unknown. So what's different this time around? The new pad, which should work with any device that offers Qi compatibility, has been completely redesigned (it's shaped like a square instead of a hockey puck) and now features magnets that will make it easier for devices to stick on it -- provided those phones and tablets in question have magnets built in as well. We'll have more information about the chargers as we get it, so stay tuned!

In this article: google, inductivecharging, mobilepostcross, Nexus 5, Nexus 7, Nexus5, Nexus7, qi, wirelesscharging
All products recommended by Engadget are selected by our editorial team, independent of our parent company. Some of our stories include affiliate links. If you buy something through one of these links, we may earn an affiliate commission.