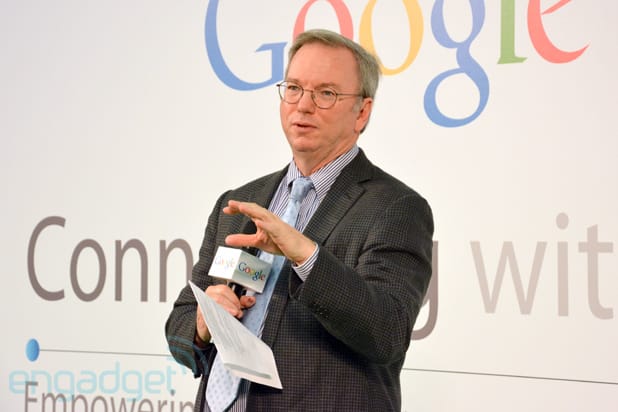 Google's Executive Chairman, Eric Schmidt, was at the Chinese University of Hong Kong earlier today to launch a local entrepreneurship program with the institute. As a man who believes in free and open internet to aid startups and innovation, the exec was happy to give an update on North Korea and Myanmar since he last visited there to promote better web access. For the former, Schmidt joked that no one called him back since the phones there still don't work for local folks.

"North Korea is the most isolated country in the world. 23 million people, a million phones, they talk within the country but not out," Schmidt said. "You cannot get information in and out of the country, it's a terrible disservice to the citizens of the country."

The exec continued that he can't tell if his visit had any impact at all: soon after he attempted to convince Kim Jong-un's government "to open up to a little bit of the internet," its recent territorial dispute with South Korea held back progress.

"I think history will see if it gets better or not," Schmidt said.

Myanmar, on the other hand, has seen much progress since Schmidt's visit back in March. The exec pointed out that the local government accelerated its telecom procurement, followed by a drastic drop in SIM card price -- from a staggering $5,000 to just $20 a piece. As a result, the network crashed under a sudden surge in demand.

"So again, guess what? The Burmese and Myanmar citizens like to talk on the phone, too. Big surprise! Same as us!"

One interesting nugget we learned was that when the Burmese military banned the use of e-mail in 2004, it only listed the big names like Hotmail, AOL and Yahoo. But Gmail wasn't introduced until April 1st in the same year (invitation-only beta launch), and since the law was never updated to include that brand, Google has "100 percent market share in the country."

"And if you think I'm joking, you know, all of the senior leaders have Gmail accounts," Schmidt added.

Coverage: Eric Schmidt (Google+), The Chinese University of Hong Kong, YouTube
In this article: burma, censorship, ChineseUniversityofHongKong, cuhk, ericschmidt, freedom, google, internet, mobilepostcross, myanmar, northkorea
All products recommended by Engadget are selected by our editorial team, independent of our parent company. Some of our stories include affiliate links. If you buy something through one of these links, we may earn an affiliate commission.