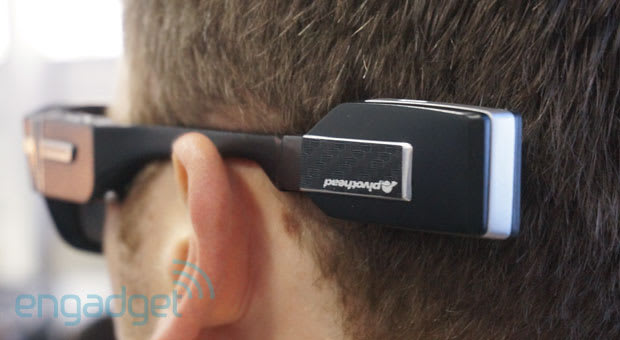 Pivothead's video-recording specs have undergone only a slight evolution since they launched early last year, gaining live broadcast abilities through the Air Sync add-on. Here at Expand NY, however, we've seen what's next, as the company's been kind enough to bring along a prototype of its next-gen model: the Pivothead SMART. Nothing's changed on the camera front, so the SMART carries the same 8-megapixel sensor as its predecessor and records up to 1080p footage at 30 fps. What's different about this new pair, though, is the addition of ports at the end of each arm into which you can plug one of three modular accessories, called Fuel, Air and Live Mods. Essentially, these Mods split the three functions of the bulkier Air Sync peripheral -- streaming, storage and power -- into individual parts. Each Fuel Mod contains a 800mAh battery to supplement the 250mAh internal pack; the Air Mod adds Bluetooth, WiFi, Android for app development and a microSD card slot for bolstering the 16GB of built-in space; and the Live Mod contains a WiFi module for livestreaming your POV.

The Pivothead SMART glasses we got to try out weren't quite the finished product -- the company's going to shorten the arms, for example, as they're a bit too long when paired with Mods. It's worth noting that the accessories didn't add much extra weight, so sore ears shouldn't be an issue. For early adopters and eager developers, Pivothead's releasing an SDK and starting an Indiegogo campaign for the SMART specs next Tuesday (November 12th), prior to a true consumer launch in March. Check out the gallery for snaps of the prototype pair and Mods, as well as some obligatory modeling shots, of course. In this article: expandnyc, expandnyc2013, glasses, hands-on, modular, pivothead, pivotheadsmart, prototype
All products recommended by Engadget are selected by our editorial team, independent of our parent company. Some of our stories include affiliate links. If you buy something through one of these links, we may earn an affiliate commission.