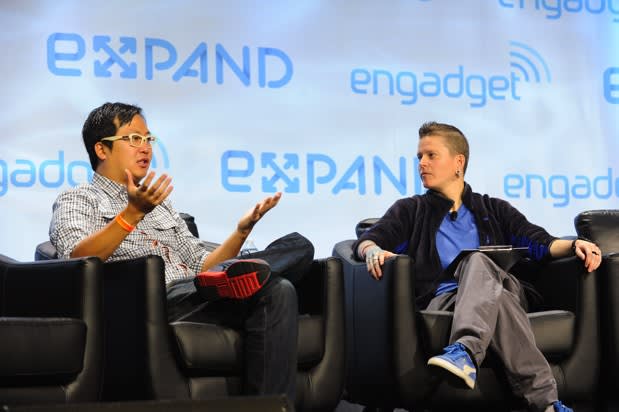 If Ben Huh, the man behind the meme-generating Cheezburger site, were writing this, you'd probably just be looking at a string of gifs and the occasional LOLcat. And, chances are, you'd find that seemingly random list of internet flotsam and jetsam amusing. Maybe you'd even save one to your desktop, enhance it with some low-level Photoshop skills and share it back out to the web. Which is precisely what Huh would want you to do; to catch, remix and re-release "found content" with an added layer of humor and whatever tools are available. It's what Huh, speaking at Engadget Expand, calls a "Happy Moment," and it evolves with every new format. You need only look to Twitter for the greatest example of this.

Huh no longer believes it's just the medium that informs the message, or content in this case -- it's you, the ever-increasing array of formats and your desire to laugh. As he explained, this internet culture of "atomized content" isn't the result of a top-down, hardware/software maker-to-consumer directive. In fact, it's the reverse that yields the magic formula for content creation: a process of consumer experimentation with format constraints. "Being told what is content is counterproductive to our creativity," he said. It's why a company like Google made its Glass eyewear available to "explorers" early: to let users experiment and help discover what real-world uses the format can have.

The old-world media structure may have changed, moving away from a single dedicated device for each form of content and into a new age with one device to receive/transmit it all, but that doesn't mean we've given up on the past. "Old formats don't die, they just become more and more specialized," Huh said, pointing to the recent explosion in vinyl sales amidst the popularity of streaming music services as evidence.

Sure, it can sometimes seem like the memes Huh's so fond of are nothing more than the fleeting ephemera of the internet hive-mind, an exclusive clique of 4channers and Tumblr-dwellers. But Huh sees this underworld of mostly gif-based humor bleeding into the mainstream and becoming part of the pop cultural landscape -- and he welcomes it. Remember McKayla is not impressed? That one web-born meme not only got reported on by mainstream news outlets, but also found its way into late-night sketch-comedy shows. That type of cross-format influence perfectly underscores the current shift taking place in content creation. And if that trend continues, Huh thinks it could inspire even more people to get online, consume, remix, share and repeat.

In this article: ben huh, BenHuh, Cheezburger, EngadgetExpand, expandnyc2013, internetculture
All products recommended by Engadget are selected by our editorial team, independent of our parent company. Some of our stories include affiliate links. If you buy something through one of these links, we may earn an affiliate commission.