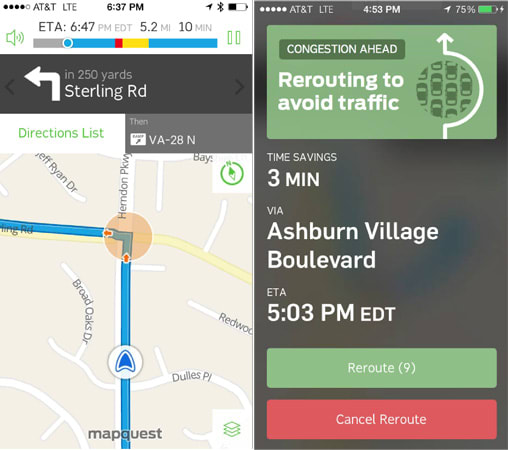 With Google, Apple and Nokia making so much fuss about navigation these days, it's easy to forget good 'ol MapQuest. That doesn't mean it isn't still going strong, though, as evidenced by the service's plans to launch updated apps for iOS 7 and Android sometime today. The apps will get a completely redone user interface that looks much more modern and takes advantage of higher-res displays. Although most of MapQuest's features may not be all that different from what you'd find on other map services, the app introduces one particular feature we've never seen before: a status bar on the top of the app that shows your full route at a glance and indicates time and distance to your destination as well as which parts (and how much) of your commute will involve heavy traffic. The service is still working on adding directions for transit and bikes, and should be in the next version; we're told that these, along with more travel integrations and product enhancements, are on the roadmap for 2014. As a sidenote, users of iOS 6 and below won't get today's update, and instead will continue using the same version they've already become accustomed to. If you're on iOS 7 or Android, however, it will show up as an update to the current versions already in the App Store and Play Store.

In this article: apple, ios7, mapquest, mobilepostcross
All products recommended by Engadget are selected by our editorial team, independent of our parent company. Some of our stories include affiliate links. If you buy something through one of these links, we may earn an affiliate commission.