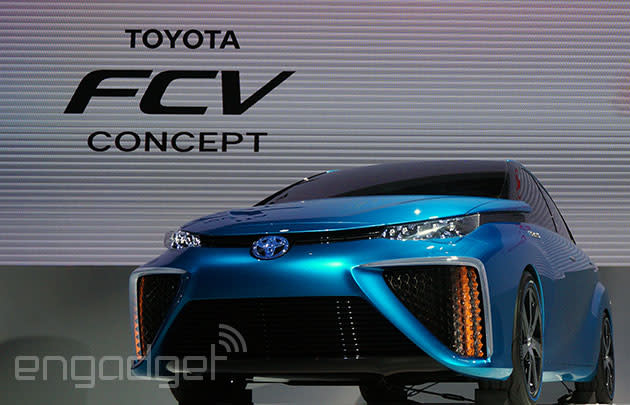 Fuel cells are very much back on the energy agenda. It's not smartphones this time, however, but vehicles. From Toyota, no less. The company's fuel cell program is about to bear fruit and it's revealed a sleek, shiny concept design that's promising a range of "at least" 500 km and a refuel time comparable to good ol' gasoline vehicles.The eventual production model car is planned to go on sale in 2015, which would ensure Toyota keeps the promise it made way back in 2010. The blue color scheme and softened design curves are meant to evoke the "key characteristics" of fuel cell cars: turning air into water. There's even a wave motif fuel cap -- it's all about the details. Once filled and plugged into a compatible home, the FCV is also apparently capable of providing enough electricity to power an average Japanese home for over a week (10 kWh). To accomplish this, two high-pressure hydrogen tanks are stored along the undercarriage, but if you're depending on the FCV to function as, well... a car, then you'll be happy to hear that it can carry around three passengers, alongside the early-adopting driver. 8
In this article: concept, fcv, fuelcell, hands-on, tokyomotorshow, tokyomotorshow2013, toyota
All products recommended by Engadget are selected by our editorial team, independent of our parent company. Some of our stories include affiliate links. If you buy something through one of these links, we may earn an affiliate commission.