Unclutter your Dropbox (or any folder) with Cloak

Change the behavior of the iTunes zoom button in 9

I have known about OS X's "Single Application Mode" for a long time, but a new feature in Mavericks has me testing it out again. According to an article on TidBITS, Single-Application Mode was introduced in 1999 with the (then) new Finder in Mac OS X. "Single-Application Mode" meant that when you switched from one app to another using the Dock then the new application that you had selected would come to the front, and the other applications would automatically hide. According to the TidBITS article, this was initially intended as the default behavior for the Finder, but public reception was so bad that so Apple dropped it as the default. However, the feature has continued to exist ever since.

Now, 14 years later, Single-Application Mode brings a new benefit for people using Mavericks thanks to the new "App Nap" feature which will reduce the CPU/energy/battery usage of applications. The easiest way to take advantage of the App Nap feature is to have all of the windows of a background application completely hidden. (For a fuller description of the App Nap feature, see Siracusa 9:13 and 9:14 over on ArsTechnica.) These two features seem like a match made in Timer Coalescing heaven.

To enable this feature, you have two options: The easy way is to download and install the Secrets preference pane and search for 'single' in the Finder preferences. Check the box, and then restart the Dock. The nerdier option is to go into Terminal.app and enter these commands:

which will enable the feature and restart the Dock (which is necessary for the new setting to be registered. If you later decide that you do not want to use this feature, use

If you enable this and need to see two different apps at the same time, use ⌘ + Tab to switch between the apps instead of clicking on the dock icons.

Keyboard Maestro offers the same idea for those who prefer to switch apps using the keyboard instead of the dock.

There is another way to do this without using the Dock method if you use Keyboard Maestro. One of the default macros that comes with Keyboard Maestro is a ⌘ + Tab replacement. It has several enhancement options as shown here. 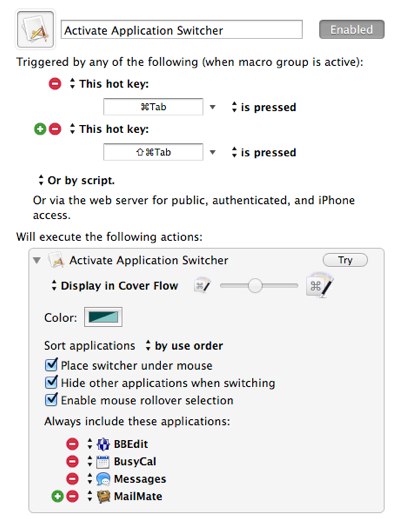 "Hide other applications when switching" is the feature that relates to our main topic here. With that enabled, any time you switch between apps using ⌘ + Tab, Keyboard Maestro will hide other apps. That gives you effectively the same functionality as Single-Application Mode without changing your dock settings. If you use this feature, you can see multiple app windows by switching between apps by clicking on the dock icons instead of using ⌘ + Tab.

Just be careful that you don't enable both of these options at the same time unless you always want to use Single-Application mode!

Keyboard Maestro gives you some other useful features such as: "Place switcher under mouse" means that the icons will appear wherever the mouse is, so you can easily choose one of the apps with your mouse if you prefer. You can also choose some applications which will always appear in the ⌘ + Tab list, even if they are not running. For example, I have added BusyCal, BBEdit, Messages, and MailMate, which means that I can switch to those apps, and if they are not already running, Keyboard Maestro will launch them. So now I no longer have to keep apps running just because I might want to use them again later.

In fact, after trying both methods, I decided that I preferred to use Single-Application Mode via Keyboard Maestro instead of the dock, because I switch between apps using ⌘ + Tab much more often than by clicking on the dock icons. On those occasions when I do need to see more than one app at a time, I find it easier to just click the necessary dock icon.

How much battery life does this save?

The answer is that I really don't know. Trying to do comparisons of real life battery usage would be nearly impossible, and probably a waste of time. So far, I find that I prefer this "Single-Application Mode" most of the time, and so the energy benefits are just a nice fringe benefit. Then again, I spend most of my time using a 13" MacBook Air. If you use a 27" Cinema Display or multiple monitors, it might not be as useful for you, but as Apple's emphasis on energy usage shows, they are seeing a lot of growth in the number of MacBook users. If you're one of them, especially if you are trying to squeeze as much battery life as possible out of your MacBook, maybe it's time to give Single-Application mode another look.

In this article: defaults write, dock, keyboard maestro, Mac, Secrets, terminal, tidbits
All products recommended by Engadget are selected by our editorial team, independent of our parent company. Some of our stories include affiliate links. If you buy something through one of these links, we may earn an affiliate commission.
Share
Tweet
Share