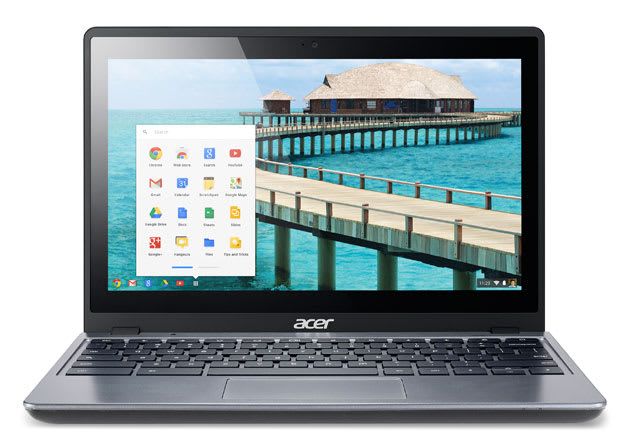 If you'd rather get hands-on with your Chromebook work sessions, Acer is looking to lend a hand. The company has outed the C720P: its first touchscreen Chromebook, and the first we've seen outside of Google's own Chromebook Pixel -- something that we've been expecting ever since more touch-enabled features showed up in stable Chrome OS builds. The Google-fied laptop sports an 11.6-inch HD LED display with 1,366 x 768 resolution alongside an Intel Celeron 2955U processor, 32GB SSD and 2GB DDR3 RAM. Weighing in at only 2.98 pounds and measuring 0.78 inch thick, the C720P claims up to 7.5 hours of battery life -- an hour less than its Haswell-powered sibling, the C720. There's both USB 3.0 and 2.0 ports, an HDMI jack, SD card slot and two years worth of 100GB Google Drive space for extra storage. Sound too good to pass up? Well, you'll be able to snag one in early December for $299 -- far less than the $1,299 Pixel -- from Amazon, Best Buy and the Acer store.

10
In this article: acer, Acer c720p, c720p, chrome, chromebook, laptops, touchscreen
All products recommended by Engadget are selected by our editorial team, independent of our parent company. Some of our stories include affiliate links. If you buy something through one of these links, we may earn an affiliate commission.