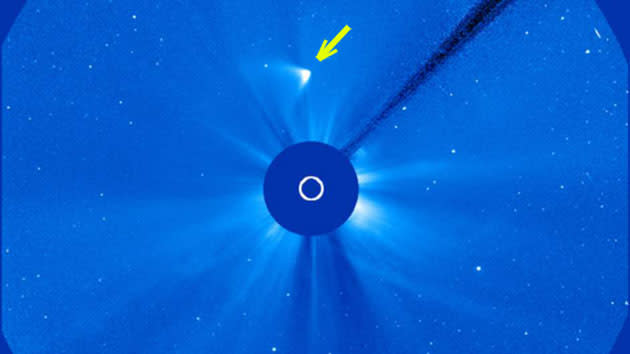 We humans can form curious attachments to non-living things, so when Comet Ison veered recklessly toward the sun, naturally we rooted for the plucky iceball. Unfortunately, scientists feared the worst after seeing it mostly vanish when it brushed past the sun's corona. Cue the heroic music, though, as new footage released early today (after the break) shows that at least part of the 1.4 mile-wide comet has emerged from the brutal encounter. It's looking a bit ragged after all that, so astronomers will have to wait a bit more to make a final call on its health. Hopefully it'll still be classed as "comet" rather than "scorched hunk of rock."

Update: Sorry folks, but it looks like the comet Icarus Ison got a little too close to the sun, as it's been confirmed that the comet has broken apart and is no more. Watch its fiery destruction in the new video after the break.

Source: BBC
In this article: Comet, Corona, Ison, NASA, SoHO, Sun
All products recommended by Engadget are selected by our editorial team, independent of our parent company. Some of our stories include affiliate links. If you buy something through one of these links, we may earn an affiliate commission.