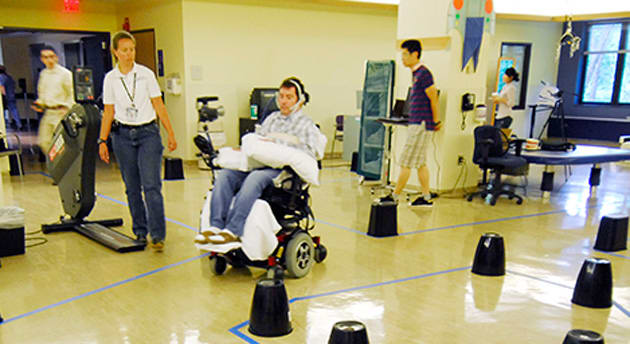 Georgia Tech researchers believed that tongue-controlled devices could help the disabled, and now they have solid proof. A new study shows that the school's wearable Tongue Drive System lets the paralyzed control wheelchairs three times faster than they would using an ordinary breath-based approach. The speediness is due to TDS' intuitive design, Georgia Tech says -- wearers use a magnetic piercing in their tongue as a joystick, which is both faster and more logical than puffing into a straw. It's subtler, too, as wearers don't block their faces with as much equipment. Trials have so far been limited to hospitals and labs, but the findings pave the way for real-world tests. Eventually, Georgia Tech hopes for widespread use that improves tetraplegics' mobility -- and gives them more control over their lives.

Via: The Verge
Source: Georgia Tech
In this article: disabled, georgiatech, tongue, TongueControl, tonguedrivesystem, transportation, video, wearable, wheelchair
All products recommended by Engadget are selected by our editorial team, independent of our parent company. Some of our stories include affiliate links. If you buy something through one of these links, we may earn an affiliate commission.