Parrot AR.Drone 2.0 Power Edition stays in the air longer, lands in the US this month 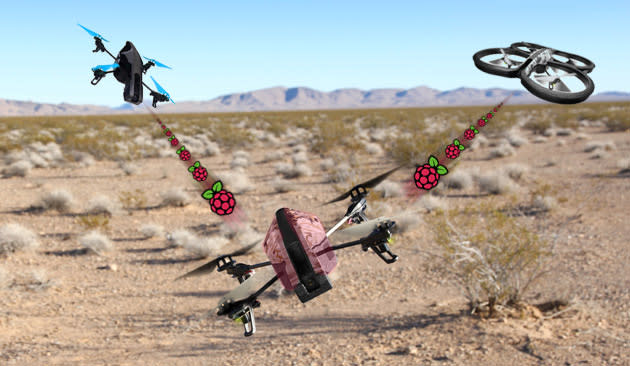 There might come a time when you'll wait for a drone instead of a truck for your Amazon or UPS package, while worrying about tech-savvy thieves instead of armed robbers. Let's just hope no ne'er-do-well uses Samy Kamkar's SkyJack for evil, because the software can worm its way into flying machines to take over their brains. Kamkar, who hacks things presumably to spread security awareness, loaded the offending code onto a Raspberry Pi-equipped Parrot AR.Drone 2.0. The result is a flying contraption that's capable of seeking out other drones' wireless signals and forcefully severing their connection from their true owners. Worse, the software works just as well installed on a land-based computer.

Curious folks can check out Kamkar's video after the break for a quick demo, but those tech-savvy enough can get a deeper understanding through SkyJack's source code. The system can only hijack drones with Parrot's WiFi MAC addresses at this point, but here's hoping companies take note and make future delivery drones more secure just in case.

In this article: ar.drone, Ar.Drone2.0, drone, hack, parrot, ParrotAr.drone2.0, RaspberryPi, skyjack
All products recommended by Engadget are selected by our editorial team, independent of our parent company. Some of our stories include affiliate links. If you buy something through one of these links, we may earn an affiliate commission.