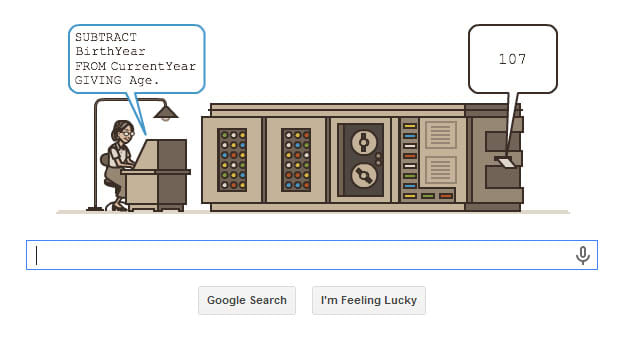 If you're wondering what's up with today's Google Doodle, it's honoring Grace Hopper, the mathematician who pioneered the use of English-like programming languages. Prior to her work, computers were considered to be glorified calculators and were programmed with binary machine code, which kept the field limited to specialists. After working on computer tech used on the Manhattan Project during World War II, she developed the A-O system for the UNIVAC 1 in 1951, which is considered to be the first-ever computer compiler. That eventually formed the basis for COBOL, the first widely used English-like compiler that laid the foundation for most computer languages today. Hopper did further research for the Navy until the age of 79 (when she retired with the rank of rear admiral) and worked for DEC until she passed away in 1992 at the age of 85. As you can see in the video after the break, most of us should be so sharp now as she was at 80 with David Letterman.

Source: Google
In this article: Cobol, google, GoogleDoodle, GraceHopper, Language, pioneer, Programming
All products recommended by Engadget are selected by our editorial team, independent of our parent company. Some of our stories include affiliate links. If you buy something through one of these links, we may earn an affiliate commission.