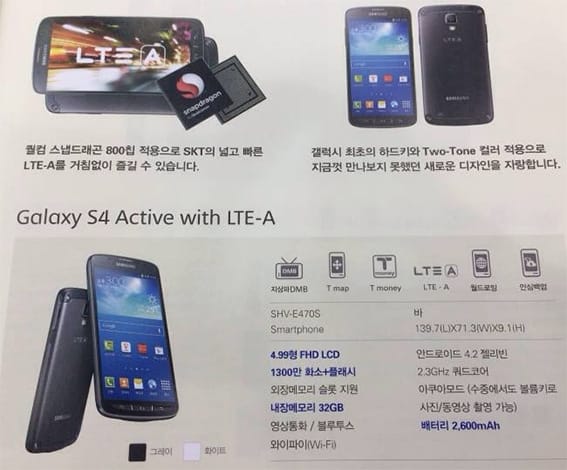 South Korea's SK-Telecom already has a variant of the GS4 to surf its LTE-Advanced waves, and now it appears Samsung will release a version of the Galaxy S4 Active that plays nice with the carrier's next-gen network. A flyer posted on a Korean-language website revealed the handset and detailed its specs, listing a 2.3GHz quad-core Snapdragon 800 processor, a healthy horsepower boost from the original's 1.9GHz quad-core Snapdragon 600. What's more, the smartphone now sports a 13MP camera -- which matches that of the vanilla Galaxy S4 -- and its storage has doubled to 32GB. Besides shaving off a few grams in weight and nabbing a white color option, the device retains the rest of its predecessor's features, all the way down to its 5-inch 1080p display and 2,600mAh battery. It's not clear if a revamped GS4 Active will make its way to other territories sans LTE-A, but adventurous (and clumsy) souls can keep their hopes up for a more powerful incarnation of the ruggedized phone.

Via: GSMArena
Source: Ruliweb (translated)
In this article: GalaxyS4, GalaxyS4Active, GS4, GS4Active, LTE-A, LTE-Advanced, mobilepostcross, Ruliweb, samsung, SK-Telecom, smartphone, Snapdragon800, SouthKorea
All products recommended by Engadget are selected by our editorial team, independent of our parent company. Some of our stories include affiliate links. If you buy something through one of these links, we may earn an affiliate commission.