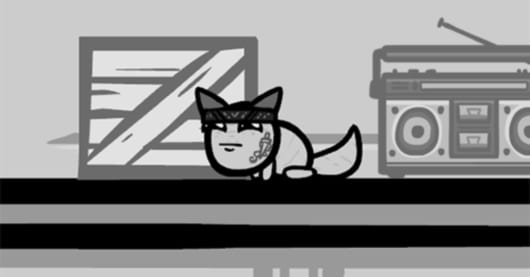 Lots of people feel that cats have some of the strongest personalities in the animal kingdom; but what if instead of just animal personalities, a cat could be a hipster, a VHS lover or Super Meat Boy fan? What if you could control and selectively breed cat personalities so that you could, as Mew-Genics creator Edmund McMillen puts it in the latest update on the Team Meat blog, "storm the cat fights with your epic army of thugged out pussy?"

McMillen explains that in Mew-Genics, cats will have varying personalities when they're born, "from lazy to sexy, from passive to psychotic." Personalities are influenced by items and furniture, which McMillen detailed the function of earlier this month. If a piece of home decor is rare, it's also possible the cat will identify with it so strongly that the cat will mutate and an element or design of the item will become part of the cat.

Again: there is a cat thug with a bandana and knife tattoo on his face. I ... I don't know how to end this post.
Source: Team Meat
In this article: android, cats, edmund-mcmillen, genetics, ios, ipad, iphone, mew-genics, mobile, pc, team-meat, thug-life
All products recommended by Engadget are selected by our editorial team, independent of our parent company. Some of our stories include affiliate links. If you buy something through one of these links, we may earn an affiliate commission.