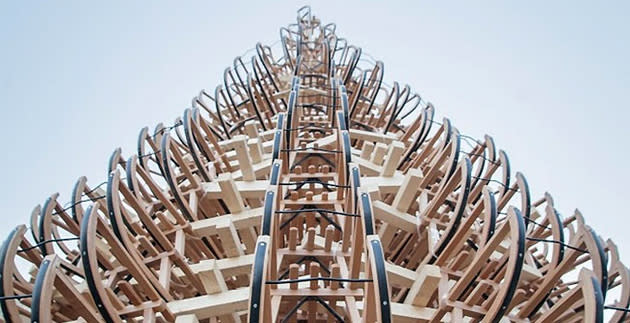 The 3D-printing craze was in full effect this week. No longer content making plastic figurines or smartphone covers, 3D makers are now taking a more delicious route. If you're pressed for time in the kitchen, the Foodini 3D printer can do some of the prep work for you. Meanwhile, Emerging Objects has found a way to turn abundant sea salt into a building material. It recently revealed "Saltygloo," a pavilion made from 336 3D-printed sea salt panels. And if cooking and building with 3D printers isn't exciting enough for you, there's always the 3D-printed lingerie that took center stage at Victoria Secret's annual televised fashion show (it was encrusted in millions of Swarovski crystals, of course). And don't worry if you're still 3D printing with traditional plastic filaments: The newest printer from 3D Systems is not only the world's first and only continuous-tone, full-color 3D printer, it also features integrated material recycling to cut down on wasted materials and filament expenses.

Coal-fired power plants have plunged China into a cloud of almost permanent smog. If enough people used it, a new bike concept recently unveiled by Bangkok-based Lightfog Creative & Design Company could actually purify polluted air as residents pedal around the city. In New York, Mayor Michael Bloomberg recently announced plans to add 10,000 charging stations for electric cars. The curbside vehicle chargers will allow EV drivers to recharge their batteries in as little as 30 minutes. Speaking of impressive speeds, Leonardo DiCaprio just teamed up with Venturi Automobiles to launch the world's first electric vehicle racing series. And if you'd rather get your adrenaline rush from flying down a mountain instead of around a racetrack, check out this parachute-powered replacement for the slowpoke chair lift.

Waiting, whether it's to be carried up a mountain or for a new house to be built, is never fun. That's why an Australian company recently unveiled the InstantSlide, an amazing prefab home can be assembled on-site in less than a minute by simply pushing a button. In Indonesia, SOM's soaring 99-story Pertamina skyscraper may not be able to assemble itself, but it does feature a "wind funnel" that can convert high-speed winds into energy. The Abu Dhabi Art Fair was recently the site of another eco-friendly architectural triumph: an airy artists' pavilion made entirely from paper cylinders. And in Paris, we learned that shipping containers would be used to transform the historic Halle Freyssinet building into a huge business incubator for at least 1,000 startup companies.

Have you decked your halls for the holidays yet? In Budapest, an ambitious design studio built an 11-meter-tall Christmas tree out of 365 wooden sleighs! After the holidays, the sleighs will be donated to kids living in the SOS Children's Village homes in Hungary. Much of the world experiences colder temperatures this time of year, which provides the perfect opportunity to get creative with ice. In Romania, shoppers can now experience the world's first supermarket made of ice, and Pinpin Studio recently unveiled a Frankenstein-esque lair built entirely from snow and ice at Sweden's ICEHOTEL. Christmas is coming up quick, but don't fret if you still haven't crossed every name off your list -- our Green Holiday Gift Guide is packed with last-minute ideas for present procrastinators and green gadget gifts. Finally, if you happen to be in London for New Year's Eve, you won't want to miss the edible-fireworks display that will shower spectators with fruit-flavored confetti.

In this article: 3d printing, eco, environment, green, inhabitat, saltygoo, this week in green, transportation, victoria secret
All products recommended by Engadget are selected by our editorial team, independent of our parent company. Some of our stories include affiliate links. If you buy something through one of these links, we may earn an affiliate commission.