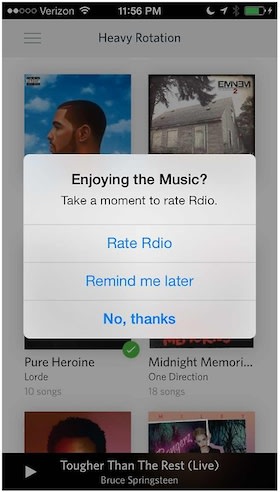 Over the past few days, there's been an ongoing discussion in the Apple blogosphere regarding those pesky "Please rate this app!" notifications that some developers employ all too often.

What's frustrating about many of these prompts is that even if a user selects "No Thanks", a similar request may bubble up on your iOS device just a few days later.

With over 1 million apps currently on the App Store, getting a particular app to stand out is daunting. With the potential for huge earnings on the line, developers naturally look to secure every advantage they can to bolster app downloads. One such advantage is an app teeming with positive reviews and a high star rating.

While a small minority of developers try and game the system with fake reviews (thankfully Apple has gotten better at sussing these out), a seemingly not so small percentage of apps will pester users with "Rate this app" notifications that some users find to be terribly irritating and intrusive.

To address this, John Gruber about a week and a half ago suggested a grass roots campaign of sorts.

I've long considered a public campaign against this particular practice, wherein I'd encourage Daring Fireball readers, whenever they encounter these "Please rate this app" prompts, to go ahead and take the time to do it - but to rate the app with just one star and to leave a review along the lines of, "One star for annoying me with a prompt to review the app."

That seems a bit extreme to me. A developer soliciting a review for an app is just part of the game, and is ultimately no different than any other business asking users to rate a particular service or product. Besides, with so many applications in the App Store, many users rely on ratings to help them make informed purchasing decisions. A lone request for an app review shouldn't, in my opinion, warrant a reflexive one-star review.

To this end, Cabel Sasser recently tweeted the following response to Gruber's suggestion:

That said, 'give apps that do this 1 star' suggestion bummed me out - stoops to the level of '1 star until you add X feature!' etc)

I'd go further than Gruber's moderate stance on The Talk Show. I think even interrupting people once with these is too much. I'm strongly against them - to me, they're spam, pure and simple. They're as intrusive as a web popup ad, they betray a complete lack of respect for users, and they make their apps' developers look greedy and desperate.

I disagree. I think there is a fundamental difference between a pop-up ad for Delta Airlines showing up on ESPN and the developers of an app I've already downloaded asking me what I think.

That notwithstanding, some developers have taken the ability to query user ratings to extreme levels. Indeed, this is where much of the problem lies.

At the other end, you find blatant harassment and tricky language meant to confuse users into capitulating. Modal alert panels might interrupt a user's workflow at inopportune times, demanding that they either leave a review now or be reminded later to do so. The natural reaction of any user in this situation would be to try to determine which series of hoops must be jumped through to get the app to leave one friggin' alone!

Below are a few examples, courtesy of the Eff Your Review Tmblr, which demonstrate how SOME developers can pepper users with "rate this app" requests that are circular and frustrating in nature.

Why isn't there an option for "Not Ever"?

Same problem, what if I never want to rate the app? Will I be getting alerts in perpetuity?

This one's confusing. What if the app is just okay and I'm not inclined to leave a review? Where's that option?

All this being said, is there, perhaps, anything Apple could do to help stem the tide of intrusive app rating requests?

Arment certainly doesn't think so. He astutely points out that Apple lack's an appropriate enforcement mechanism that would be less intrusive than the app rating requests themselves. In other words, "rate this app" requests may simply be unfortunate and necessary evil.

Disagreeing with Arment is former Apple engineer Chuq Von Rospach who writes that Apple could simply add a "report this as inappropriate" button to the type of alerts they'd like to keep an eye on.

Now, hire a small team. their job: manage the biggest problems, where we can define biggest various ways, but typically, a combination of number of reports and the velocity of those reports (how quickly they come in; six reports over a month is a lot less urgent than 6 reports in an hour). Their job, to start, is to evaluate reports and either validate them or reject them. If they're validated, then whatever we decide is appropriate happens (the 'thing' is removed from view, the developer gets a yap letter, the developer loses privileges, etc...). If they reject the report, then nothing happens.

Not a bad idea in theory, but this seems overly ambitious for a problem, that dare I say, doesn't warrant such an involved solution.

Attach a "report this as inappropriate" button to the things you want to police.

This might work for push notifications, but as I wrote before, I don't think it could be integrated into the notification UI without much bigger costs than it's worth in visual design, space, and user confusion.

But for "Rate This App" dialogs, there's no good way to get it to work. If Apple added it to every UIAlertView, it would be completely baffling in the vast majority of cases.

"An error occurred while uploading." OK, Report As Inappropriate.

The most reasoned response I've seen on this issue comes courtesy of Chris Gonzales who provides some guidelines that both developers and users should be cognizant of.

From the developer side, Gonzales writes that users should be given the option to completely opt-out of an app review request and never be bothered for a review again.

On the user side of the equation, Gonzales says, amongst other things, that users should be a little bit more understanding.

At the end of the day, most developers are simply trying to make a living from their work. In all likelihood, all but a few of them would rather leave you alone to enjoy their app, but let's face it: App Store ratings can make or break entire businesses. It's hard to blame them for encouraging people to help out a little.

Indeed, I think a one-off app review request is more than fair game.

So that is a hopefully quick summary of the whole "Rate this app" debate which surfaced last week.

But what do you guys and gals out there think? Are you horribly annoyed by these rating requests? Is this much ado about nothing? Should Apple implement some sort of mechanism to combat developers who take things to far?

Chime in in the comments below and sound off. And don't worry, we won't email you back next week inquiring as to what you thought of our commenting system.

Update: Commentor cycomachead points us to the fact that iRate, a framework some developers use to solicit app ratings, recently made a number of changes in light of the ongoing debate.

In this article: app store, IOS
All products recommended by Engadget are selected by our editorial team, independent of our parent company. Some of our stories include affiliate links. If you buy something through one of these links, we may earn an affiliate commission.