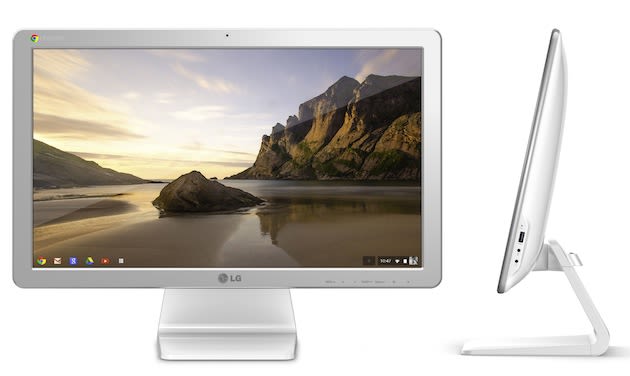 Besides Samsung's Chromebox series ChromeOS has appeared mostly on laptops, but now LG will put its new Chromebase up against Apple's iMac and Windows-based all-in-one desktop PCs. According to the spec sheet, that 21.5-inch 1080p IPS LCD hides an Intel Celeron CPU, 2GB of RAM and a 16GB SSD inside, along with an assortment of ports (including HDMI-in so you can use it as a monitor) in the back and on the sides. It won't compete with high-end PCs on horsepower or internal storage, but it's ready to play a part in Google's vision of network computers that run mostly web-based apps, are hassle free and require no real maintenance. We're not expecting to get Steam loaded on here, but when we're playing IT for relatives over the holiday something like this may seem like a better option. Without a pricetag it's hard to judge properly, so we'll look for that and more information -- including other devices that might use some of the Chrome-related trademarks that leaked in October --next month at CES.

4
Source: LG
In this article: aio, all-in-one, ces, ces2014, chromebase, chromebook, chromeos, google, hdpostcross, lg, LG Chromebase
All products recommended by Engadget are selected by our editorial team, independent of our parent company. Some of our stories include affiliate links. If you buy something through one of these links, we may earn an affiliate commission.