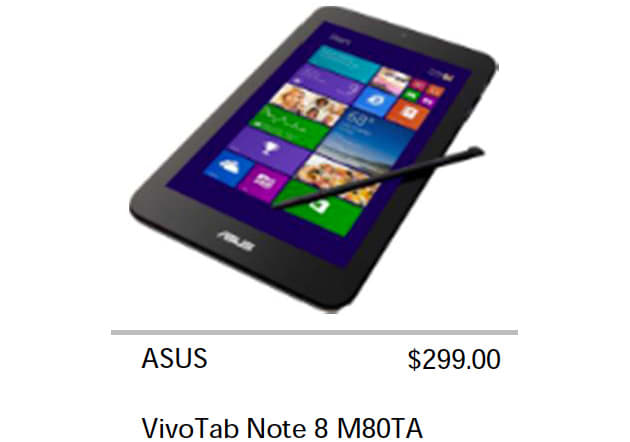 Dell's Venue 8 Pro may soon get some fresh competition. Mobile Geeks has discovered some imagery (albeit of the heavily pixelated variety) and full specs for ASUS' VivoTab Note 8, an entry-level Windows 8.1 slate with pen input and a worryingly Samsung-esque name. It looks like the VivoTab should closely match Dell's hardware, with an 8-inch 1,280 x 800 IPS display, a 1.33GHz Bay Trail-based Atom chip, 2GB of RAM and either 32GB or 64GB of expandable flash storage. ASUS may also reuse a few parts from the MeMO Pad HD 7, including the 5-megapixel rear camera, 1.2-megapixel front camera and a 3,950mAh battery. Take the launch details with a grain of salt, however. The image leak has the VivoTab Note 8 arriving during the holidays for $299, but time is running out and a release may not happen until the new year.

Source: Mobile Geeks (translated), SlideShare
In this article: asus, atom, baytrail, leak, m80ta, tablet, vivotab, vivotabnote8, windows, windows8
All products recommended by Engadget are selected by our editorial team, independent of our parent company. Some of our stories include affiliate links. If you buy something through one of these links, we may earn an affiliate commission.