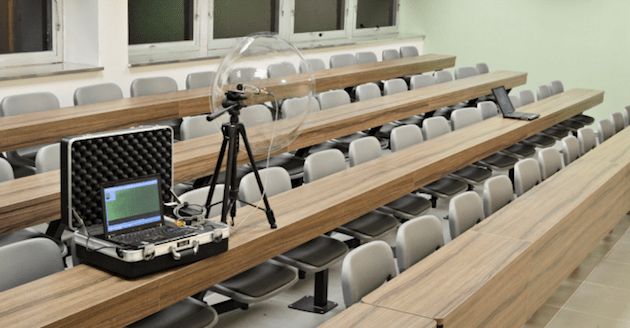 Be afraid, friends, for science has given us a new way in which to circumvent some of the strongest encryption algorithms used to protect our data -- and no, it's not some super secret government method, either. Researchers from Tel Aviv University and the Weizmann Institute of Science discovered that they could steal even the largest, most secure RSA 4,096-bit encryption keys simply by listening to a laptop as it decrypts data.

To accomplish the trick, the researchers used a microphone to record the noises made by the computer, then ran that audio through filters to isolate the vibrations made by the electronic internals during the decryption process. With that accomplished, some cryptanalysis revealed the encryption key in around an hour. Because the vibrations in question are so small, however, you need to have a high-powered mic or be recording them from close proximity. The researchers found that by using a highly sensitive parabolic microphone, they could record what they needed from around 13 feet away, but could also get the required audio by placing a regular smartphone within a foot of the laptop. Additionally, it turns out they could get the same information from certain computers by recording their electrical ground potential as it fluctuates during the decryption process.

Of course, the researchers only cracked one kind of RSA encryption, but they said that there's no reason why the same method wouldn't work on others -- they'd just have to start all over to identify the specific sounds produced by each new encryption software. Guess this just goes to prove that while digital security is great, but it can be rendered useless without its physical counterpart. So, should you be among the tin-foil hat crowd convinced that everyone around you is a potential spy, waiting to steal your data, you're welcome for this newest bit of food for your paranoid thoughts.

In this article: audio, cryptography, encryption, hack, RSA, security, TelAvivUniversity, WeizmannInstituteOfScience
All products recommended by Engadget are selected by our editorial team, independent of our parent company. Some of our stories include affiliate links. If you buy something through one of these links, we may earn an affiliate commission.