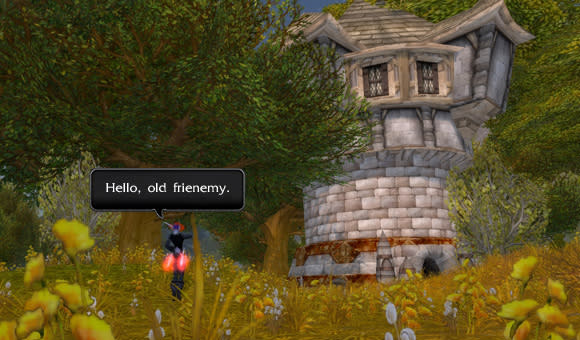 As we usher in a new year, our thoughts inevitably turn to the single most important subject there is: our rogues. And how we wish that WoW's designers would make a New Year's resolution to give them more love and affection and hugs and presents and big happy smiley-face stickers than any other class.

But that's just it: Although you might often read otherwise in public forums or on Twitter, the rogue class doesn't objectively have less fun stuff to do within the game than other classes, nor does it receive less attention from the game's design team. The reason I think some players grumble is that rogues receive roughly the same amount of love as everyone else -- but they used to receive more.

How the World Around Got Us Down

When you run a game the way WoW is run -- stunningly immense, yet its creators want it to keep growing; serving an unprecedentedly ginormous, diverse playerbase (socially and geographically), yet its designers don't want to forsake any of their interests -- some priorities ultimately have to yield to others.

As the Lich King era gave way to the Cataclysm era and "bring the player, not the class" became the buzzphrase of the times -- and an entirely noble and justified goal, in my view -- hard choices had to be made. Among them were decisions related to class "flavor": For instance, in the process of remaking an entire online world (and all of the quests within it), should limited development time and resources be devoted to updating old class-specific quest lines, some of which took place within parts of Azeroth that no longer existed? Or were those resources better spent on areas of the game that all players could benefit from?

The designers chose the latter. And they did so not only with class-specific quest lines (which affected all classes), but with other areas of the game that were once the unique province of rogues. Farewell, dangerous or inconvenient traps within raid zones that only rogues could disarm. Goodbye (mostly), locked chests within dungeons that rogues were in the best position to crack open. Auf Wiedersehen, Ravenholdt as a miniature rogue-only quest hub; your return in the Level 85 legendary quest line was as glorious as it was ephemeral.

Around the same time, the designers grew more effective at evening out imbalances between classes that had largely benefited rogues, especially later in the life of an expansion. In PvP, health pools were increased, resilience became more effective and diminishing returns grew more strict (among other changes), all but eliminating the rogues' infamous ability to keep enemies stunned until they were thoroughly deathified.

In PvE, our dominance in DPS meters lessened as designers made more adjustments during expansions. Meanwhile, boss fights began to grow more complex, driving us farther and farther from the (admittedly dull) Patchwerk model on which we traditionally thrived.

As rogue community leader and class blogger Haileaus puts it, "We may still be king, but it's a lower throne." We Could Use a Little Soulshine

As I was thinking about this column -- the second in our three-part discussion of the major questions and issues facing the rogue class as we head into Warlords later this year (here's your opportunity to use your Vanishing Powder and go read the overview or Part One) -- I read back through the comments you've posted in weeks past. As you all shared your thoughts about what makes rogues feel unique, the conversation often turned not to features you felt should be newly added or to major overhauls you'd like to see implemented, but instead gazed back fondly on features we've lost.

Although I think there's a lot to be said for our tendency to make the past look prettier than it actually was, I'm inclined to agree. Amidst the push to reimagine the game in the context of "bring the player, not the class," rogues lost some important parts of their soul. Paradoxically, those parts lay within the little things -- traps to disarm and locks to pick, those moments of serendipitous usefulness -- that only rogues could do.

Fundamentally, the rogue remains a solidly constructed class with a cleverly (and delicately) balanced resource system and a well-defined spellbook. What's missing now is some of the meat between those bones. Those who remember what it was like to have it are most prone to feel the loss.

My rogue is the first character I ever leveled in WoW, and some of my earliest, sharpest -- and yes, rose-colored glasses or no, fondest -- memories of the game center around the quest chain in which she gained the ability to poison her weapons (and brew the now-anachronistic Thistle Tea). It was while failing to discover the stealthed agent hiding in Westfall, and then failing to get past the Level 24 elite guarding a lockbox in Klaven's Tower (failure has always been one of my defining features as a rogue player), that I made my first acquaintances in the game: a pair of players (not rogues) who happened to be hanging out in the tower, and who tried to help me complete the quest chain. It was there that I realized I could Sap the Level 24 elite instead of trying to kill him, and started to appreciate my class's toolkit more deeply. It was also there that I joined my first guild, since those two players seemed so friendly. And it was later in that questline, stricken by a weeklong debuff that prevented me from using stealth (yes, this debuff actually existed), that I first learned about the Auction House, and how I could use it to buy a potion that would cure me of the affliction.

All of these realizations, and all of these "firsts," would probably have happened eventually at an appropriate time, even if there had been no class-specific quests. Today's rogues are not doomed to be horrible -- they don't wander around with their mouths agape, holding their daggers by the blades and wondering why it hurts so much when they stab people. Those who want to learn will still do so, and there are still plenty of people who play a rogue and love it.

But the fact that so many of my "firsts" happened within the context of a quest chain that only my class could complete? That's a potent thing. Those moments left me with more positive feelings toward the class I'd chosen. They gave me a greater sense of appreciation for what rogues had to offer, and a feeling of surety that those class quirks matched what I was looking for. They were key sparks for the long love affair that ultimately blossomed between me and the class.

The feel of a rogue, particularly in terms of casual gameplay, used to have more depth to it than it does today. I suspect that many of us who remember that time still feel a hollow space where it used to be. It doesn't affect the buttons we push or the DPS rotations we execute, and it doesn't make playing a rogue any less fun overall. Maybe the game as a whole truly is better off without spending resources to develop that depth.

But I miss it nonetheless. And I wish people who are leveling a rogue for the first time in 2014 could experience at least some of it. I think they'd appreciate the class-specific love, even if they never knew it used to be missing.

Sneak in every Wednesday or two for an early glance at rogues in the upcoming expansion, a look at the eight key things you should keep in mind when leveling your rogue -- and of course, the answer to why we'll always be the bad guys.
In this article: featured, rogue-changes, rogue-info, rogue-questions, rogue-specific-features, special-snowflakes, wow-rogue, wow-rogues
All products recommended by Engadget are selected by our editorial team, independent of our parent company. Some of our stories include affiliate links. If you buy something through one of these links, we may earn an affiliate commission.