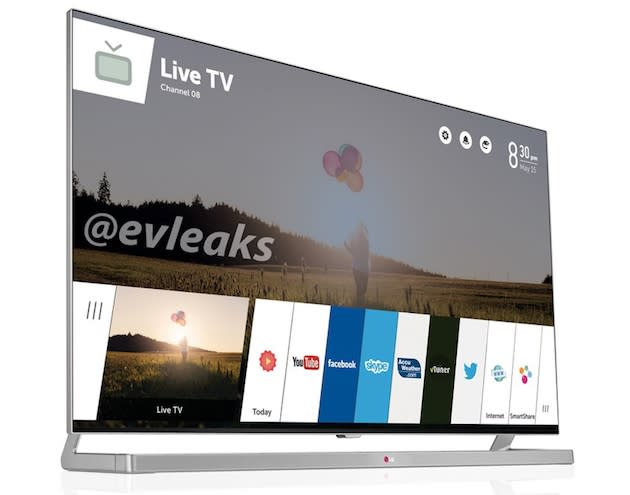 LG's rumored webOS Smart TV is tipped to arrive at CES in the coming days, but that hasn't stopped intrepid leaker @evleaks from giving us what could be an early preview of its next connected set. In what appears to be a significant departure from the smartphone-like UI utilized in its current Smart TVs, the leaked render shows off LG's modern interpretation of the Cards interface we first saw in Palm's webOS-powered smartphones and tablets. LG chiefs have already indicated that the company has thrown its weight behind the Enyo open-source JavaScript development framework, which it acquired from HP as part of the webOS project, in the hope it will encourage third parties to create apps and services for its next-gen TVs. If the leaked image is real, YouTube, Facebook, Twitter and Skype apps will likely be available at launch, but we're set to find out for sure when CES 2014 commences next week.

In this article: ces2014, hdpostcross, HP, lg, palm, smart tv, webos
All products recommended by Engadget are selected by our editorial team, independent of our parent company. Some of our stories include affiliate links. If you buy something through one of these links, we may earn an affiliate commission.