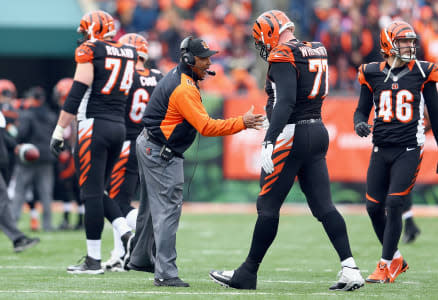 Despite all of the technology available to us, streaming sporting events is expensive and often difficult. You've got to pay exorbitant subscription fees, make deals with cable providers and/or buy an expensive gaming system. Why can't we just stream a game online once in a while?

Well football fans, thanks to CBS, that time has come. According to a report from Broadcast & Cable, CBS will be streaming coverage of the American Football Conference's playoff games. The stream will start this weekend with the wildcard matchup between the Chargers and the Bengals. Go to the CBS website on your computer or tablet and enjoy. CBS is only planning on streaming four games, the wildcard, two divisional round games, and the AFC conference championship game.

Sadly, the NFL's asinine blackout policy still applies to the online stream, meaning if you're a fan in the Cincinnati market and the game doesn't sell out, you won't be able to stream the game online. Cincinnati.com received confirmation from the NFL this afternoon that once again, fans don't matter to the billionaires who own the team. The official word from Brian McCarthy of the NFL is:

Just a quick clarification. The blackout policy applies to online streaming as well. If the game is blacked out on TV it would also be blacked out online... in the local market only.

So sorry Bengals fans. Pray the game sells out. Otherwise you're going to be punished for no good reason other than not being able to afford tickets. Maybe you can get a friend whose outside the area to FaceTime you their stream from the CBS website.
In this article: cbs, nfl, streaming
All products recommended by Engadget are selected by our editorial team, independent of our parent company. Some of our stories include affiliate links. If you buy something through one of these links, we may earn an affiliate commission.