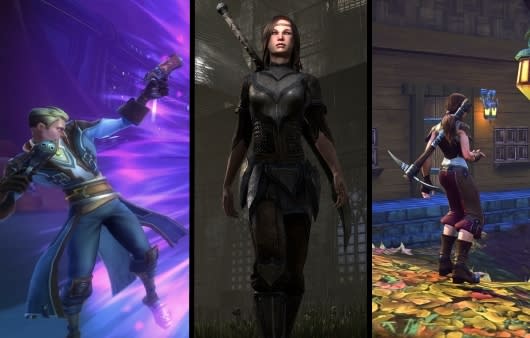 Out with the old desk calendars that you didn't use past February 2013 and in with the new, I always say! It's a brand-new year, and while we don't know all of the twists and turns that we'll travel in MMO news in 2014, I dare say it promises to be a fascinating ride.

Last January I gave my list of 10 new MMOs to watch for that year, and I'm a sucker for traditions. With 2014 a mostly blank slate right now, I want to lay out the up-and-coming class of games that at least have a shot at releasing by December. There are the big names, of course, but several other titles that could be sleeper hits if all goes right. Which will succeed, which will flop, and which won't even get out of the door? I don't claim to know all, but I know all, so here are my prognostications for 2014! What is it: An MMO adaptation of the insanely popular open world fantasy RPG series, set about 1,000 years before Skyrim. While it won't be as freewheeling as the single-player titles, the developers promise a single-shard world with lots of exploration and rich character development, as well as a strong PvP component.

Why it's worth watching: The IP, its large fanbase, and accessibility across multiple platforms instantly catapulted ESO into "major contender" status when it was announced. With a numerical advantage for a large release, we'll see if the game can capture and retain subscribers for the long haul.

Chances of releasing in 2014: Assured. ZeniMax has committed to an April 4th release date for computers, with consoles to follow in the summer. It will be launching subscription-only.

What is it: Bungie's follow-up to Halo. Players will defend the last city on Earth as they battle against invading aliens and hop planets in the solar system. It will be coming out for both PlayStation 3 and 4, at least initially.

Why it's worth watching: Destiny doesn't stray far from the field that made Bungie developers rock stars, as the team makes a sci-fi shooter MMO that might be Halo if you squint just right. It's also got a hint of Star Wars and space westerns in there, and the visuals are drool-worthy.

Chances of releasing in 2014: Incredibly good. The studio's already committed to a Sepbember 9th release date. What is it: A colorful and humorous sci-fi western MMO that gives players the chance to explore the most fascinating planet in the universe: Nexus. WildStar boasts a strong World of Warcraft vibe, particularly with its stylized graphics, but has a more modern approach with its action combat system. It will launch with a subscription model coupled with the ability to buy and sell game time between players.

Why it's worth watching: The path system allows players to customize their leveling experience according to their preferred playstyle. WildStar has a number of other attractive features, such as its combat telegraphs, robust player housing, and large-scale raids.

Chances of releasing in 2014: Very, very good. Carbine hasn't set a date yet, but the beta is progressing and word is that we should see this game sometime in the spring.

What is it: It's... complicated. Landmark is a companion game to the upcoming EverQuest Next that focuses more on sandbox elements, player-generated content, crafting, building, and multiple worlds. That said, SOE assures us that it is an MMO in its own right, with progression and combat and everything.

Why it's worth watching: The building tools certainly look robust, and there is the option to turn a project into real money via the Player Store. If nothing else, it's the only option to tide EverQuest Next fans over until that game launches sometime in the future. Plus, it's free-to-play!

Chances of releasing in 2014: Considering that it's going into alpha testing in February and beta testing by the end of March, I feel comfortable saying that we'll be seeing a launch by the end of the summer. What is it: A "sandvox" game that creates and destroys themed worlds on a regular basis while characters explore, build, destroy, and swap classes. It will boast the same type of free-to-play model that RIFT currently enjoys.

Why it's worth watching: It might just be that casual, indie-style MMO to scratch your Minecraft itch. With the ability to build permanent cornerstones (player housing) that come with you between worlds and its retro feel, Trove is eschewing massive scope for an emphasis on sheer fun.

Chances of releasing in 2014: The developers assured me that it would be launching in some form this year, which smells like a non-wipable beta "soft launch." So good? I guess?

What is it: A military shooter that puts you in the shoes of an elite tactical agent who must work to restore order to a virus-devastated NYC. It will be coming out on the Xbox One and PlayStation 4, marking it one of the first of the next gen console MMOs, as well as for the PC.

Why it's worth watching: Gamers seem to snap up military titles with Tom Clancy's name on it, plus this actually looks pretty fascinating. The modern day setting coupled with sci-fi and conspiracy elements are a refreshing change of pace from fantasy. Plus, it's going to have some measure of mobile and tablet tie-ins.

Chances of releasing in 2014: Count on it. Ubisoft's said multiple times that The Division should be landing by late 2014.

What is it: An "everything and the kitchen sink" fantasy sandbox MMO created by the legendary Jake Song. It's been out for a while in Korea and is making its way across the world in regional releases.

Why it's worth watching: It's a proven product that's gotten rave reviews for its go-anywhere, do-anything approach to virtual worlds. Be a farmer, a pilot, a fighter, or a sailor -- ArcheAge has it all and then some. Plus, the production values are out of this world with gorgeous graphics and stirring music galore.

Chances of releasing in 2014: Hope springs eternal, huh? We honestly don't know what's going on with the localization of ArcheAge for the west, but 12 months is a long time, so I'll give it a 50-50 chance to surprise us with a late-year release.

What is it: A hardcore fantasy sandbox utilizing the popular pen-and-paper franchise. It's one of the first Kickstarter MMOs to be making it to release, having raised over a million dollars in crowdfunding.

Why it's worth watching: If you've wanted to live in a game world versus merely vacation there, Pathfinder might be for you. Players will utilize a real-time skill training system, construct buildings across the landscape, and engage in a dynamic economy, all within a very wild and wooly (read: PvP-enabled) land.

Chances of releasing in 2014: As with many of these Kickstarter MMOs, Pathfinder Online's release will be rolled out in stages. While the game is only halfway done, early access should begin by Q3 2014. What is it: A sequel to the 1984 space sim Elite, or how I like to call it, "that space game that isn't Star Citizen." You'll start off with a small ship and look to make a name for yourself by exploring, trading, and fighting across the stars.

Why it's worth watching: Elite: Dangerous has a respectable pedigree and could be the underdog space sim that surprises those who have had their attention elsewhere. I'm just excited to have two space sim MMOs in development instead of one.

10. Shroud of the Avatar

What is it: Richard Garriott's spiritual successor to the Ultima franchise (he doesn't have the rights to the Ultima name, however). It's a single- and multi-player open world RPG with plenty of housing and old-fashioned RPG mechanics.

Why it's worth watching: This was another crowdfunding success story that has some folks hoping for the second coming of Ultima Online. The crafting and housing systems, in particular, look deep and involved.

Chances of releasing in 2014: Good, at least for part of it. The team's stated that the first episode will come out by the end of the year although early access folks are currently playing it.

Is that not enough for you? Well, I ran out of space to talk about all of the other games that are on deck for 2014 and beyond, so I'll quickly mention 15 more of them here: The Repopulation, EverQuest Next, Warhammer 40K: Eternal Crusade, Star Citizen, Firefly Online, Camelot Unchained, World of Warships, Blade and Soul, TUG, Undead Labs' Class4, Black Gold Online, Shadowrun Online, Black Desert, Transformers Universe, and Albion Online.