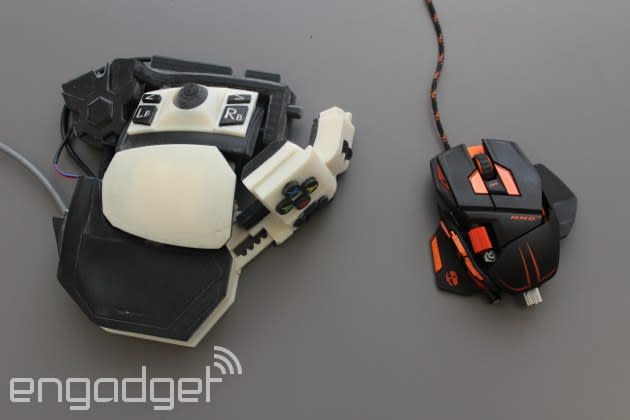 Putting aside arguments over platform exclusives, graphical output and the convenience of gaming from the couch, one element separates console and PC gamers more than any other: control. Those parked in front of a television have an all-in-one gamepad with analog nubs, clicky buttons and smooth triggers, while those who bask in the glow of a monitor boast wield a high-accuracy mouse and and full QWERTY keyboard. While trying to jump from one platform to the other, inventor Chris Zhao-Holland found the differences frustrating. Sure, games on the PC benefited from mouse control, but the stiff inputs of the keyboard lost the built-in sensitivity of the console's dual-analog joysticks. It didn't take long for him to cook up the idea for Sinister, a modular PC keypad that hopes to take the best from both worlds.

Zhao-Holland dropped by Engadget's West Coast office with an early prototype, presenting us with a 3D-printed palm-rest adorned with Xbox 360 buttons and a single analog nub. These buttons are modular, and can be rearranged mid-game without forgetting their function. The contraption looks a little like a mash up between one of Razer's keypad peripherals and a Splitfish controller, and oddly, functions like both. A pair of switches on the unit's side decide if the PC will recognize it as an Xinput device (like an Xbox 360 controller), a mouse and DirectInput device (with keys that need to be assigned through a companion program) or a mixture of both. These disparate modes give lend the device compatibility, but each comes with its own caveats.

In the default Xinput mode, Sinister is immediately usable with any game that supports the Xbox 360 controller, but, it also means that the device acts like an Xbox 360 controller. This specifically becomes an issue while using the mouse, which emulates the gamepad's right analog stick while in this mode. Games that normally display a cursor won't, and first person shooter titles will react to mouse movements differently than with native mouse control. Gamers used to precision mouse control might find it a little off putting. Tweaking in-game sensitivity settings can help, but the experience will vary from title to title. To combat this, the device has a hybrid mode, allowing the gamepad to function like an Xbox Controller, while leaving the mouse (attached through a USB passthrough port) to function in its native mode -- the only problem here is not every game supports using both devices simultaneously. Finally, Sinister has a DirectInput mode, which allows users to map the gamepad's buttons to keyboard commands manually while still enjoying full native mouse control.

We spent a few minutes exploring Crysis 3's tutorial with the gamepad, and while it showed some potential, there's definitely a learning curve. Sinister's mishmash of console and PC control schemes often left us confused, performing the wrong action or misinterpreting on-screen prompts. Its creator admitted to us that it takes some getting used to, but mentioned that its gamepad roots help it in one other area: haptics. Hidden under the device's palm rest are Vivitouch electroactive polymers, which lend Sinister a more precise haptic response than most gamepads. Indeed, the keypad's rumblings were subtler than most -- like our previous experiences with the haptic technology it felt more delicate and detailed, but not quite as forceful.

Before Zhao-Holland left, he showed us a video of what the final product would be able to do. In addition to emulating controllers, swapping buttons and trying to bridge a gap between two gaming worlds, the keypad element also transforms to match a players hand-- adjusting in height for players who grip their keyboard like a "claw" and those who lay their hand relatively flat. The stiff, printed prototype we handled wasn't quite capable of these adjustments just yet, but the creator told us his team is hoping to refine it before CES 2014. In fact, the entire project is on the fast track: later this month, Tivitas Interactive will be launching a Kickstarter campaign to bring the product to market, and plans to ship its first units before the summer. Sinister is an interesting proposition -- it stands to offer a degree of analog control that otherwise escapes PC gamers, but it faces some limitations by leaning on Xinput for its primary input mode. At this point in time, it's difficult to say if it's a knockout device that will cater to a small niche or a transitional idea that came too late, but it has potential, and we're looking forward to see if it lives up to it. Besides, it's hard not to love nerdy, modular devices.

In this article: ces2014, gaming, hands-on, Kickstarter, modular, pc games, pcgaming, peripherals, sinister, tivitas interactive, video
All products recommended by Engadget are selected by our editorial team, independent of our parent company. Some of our stories include affiliate links. If you buy something through one of these links, we may earn an affiliate commission.