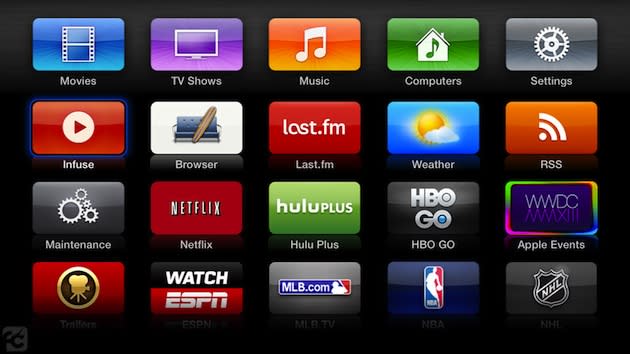 The folks at Firecore are working on more than just the latest version of their Infuse media player, and just delivered an updated software package for jailbreaking second generation Apple TVs (the current third gen model has, so far, remained closed). Showing once again that jailbreaks aren't just for the iPhone and iPad, the new version of Seas0npass provides an untethered -- read: it still works after a reboot -- method for Apple TV players running the 5.3 software update that added access to channels like HBO Go and WatchESPN. That's still a step away from the most recent Apple TV 6.0 update that arrived this fall with iTunes Radio and AirPlay from iCloud features, but the team says it's made "some encouraging progress" there. The combination of Seas0npass and aTV Flash (black) lets your hockey puck play a number of new video/audio formats and run home theater software like Plex and XBMC, check out the site for instructions.

In this article: apple, appletv, AtvFlashBlack, firecore, hdpostcross, jailbreak, Seas0nPass, untethered
All products recommended by Engadget are selected by our editorial team, independent of our parent company. Some of our stories include affiliate links. If you buy something through one of these links, we may earn an affiliate commission.