How child-security apps lengthen the reach of parents 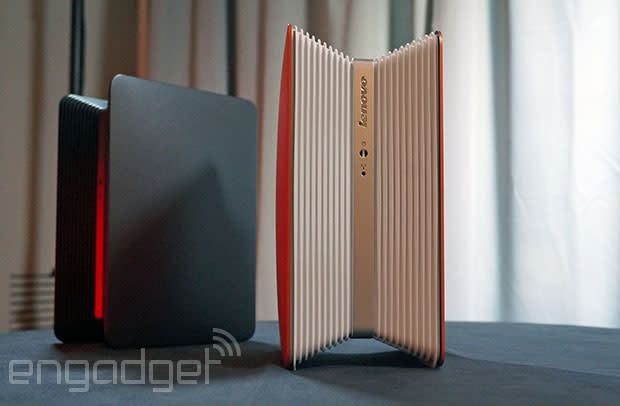 Lenovo makes a lot of laptops. And tablets. And a few phones. But amid its exhaustive PC range, there's also the eye-catching Beacon. Priced at $199, although lacking any storage out of the box, it tries to strike a balance between personal cloud storage and media server. It comes preloaded with XBMC, while dual HDD bays will support up to a heady 6TB of storage. The Beacon, powered by a dual-core (unspecified) Atom processor can then stream whatever you put inside it to multiple devices at once -- we saw it in action, and it managed to output to both a PC and Android phone without a hiccup. You can use your hand-held smart device as a remote (replete with mouse cursor), which makes digging through piles of photos and videos at least a little bit easier.

On the back, alongside HDMI, there's Ethernet and twin USB ports, meaning it'll be happy to link up to PCs and TVs for big-screen viewing. Once linked to the respective app, pics and videos captured on your phone can be automatically (or manually) uploaded. As you can see, it's also not the typically unassuming (read: dull) storage hub either and will launch in orange, blue, gray and black finishes this April. In this article: beacon, ces, ces2014, hands-on, hdpostcross, lenovo, Lenovo Beacon, XBMC
All products recommended by Engadget are selected by our editorial team, independent of our parent company. Some of our stories include affiliate links. If you buy something through one of these links, we may earn an affiliate commission.