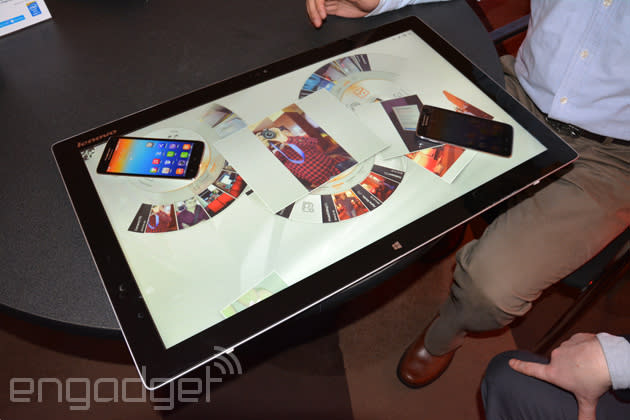 In addition to announcing a slew of laptops, tablets and convertibles, Lenovo just unveiled a trio of Windows 8 all-in-ones. Of the bunch, the most notable might be the Horizon 2, which marks Lenovo's second attempt at a "portable" 27-inch desktop. In particular, Lenovo added both NFC and a new, graphically-pleasant way to pair the PC with an Android device: you can now shake your smartphone to share its media with the Horizon 2, causing photos and other content to "fall" onto the tabletop screen -- an effect demonstrated in the video after the break. From there, you can use motion controls on the smartphone to do things like navigate the UI and sort through photos, music tracks and the like. The wireless link between the two devices also lets you instantly browse fresh photos on the Horizon 2 once they are taken with the phone, as well as letting you throw PC content onto the phone. Additionally, Lenovo built in some more multi-user games, along with enhanced Facebook integration so that you can upload photos directly to the site after editing them. All of which sounds totally reasonable: If someone's going to buy a honking 27-inch desktop meant for digital board games, they'd better be able to get the most out of the software experience.

Speaking of that "honking" bit, this version is also more compact than last year's model. Granted, 16.8 pounds is hardly what we'd call "portable," but still, a 12 percent weight reduction is still something. Other changes: Though the standard screen resolution is still 1080p, you can now opt for a 2,560 x 1,440 panel instead. Like the original, it features the "latest NVIDIA graphics," up to 8GB of RAM and up to 500GB of storage, though let's face it: No one's buying this for the specs. Nope, you're buying it for the suction-cup joysticks, which have thankfully been kept around for the second gen.

In addition, Lenovo updated last year's A730 with the A740. This, too, has a thin frame (4mm in this case), which can be pushed down so that the screen lies flat. Now, though, there's a 2,560 x 1,440 screen option, in addition to the standard 1080p (noticing a theme here?). Lenovo also stepped up to 802.11ac WiFi, with Haswell processors, up to 8GB of RAM, 1TB of storage, NFC and an optional TV tuner rounding out the specs. Moving on, there's the C560, which replaces last year's C540. Available in black and white with a 23-inch screen, it's clearly the lowest-end model here, with a 1080p display, an optional touchscreen and processors that run the gamut from Celeron to Pentium to Core i3, i5 and i7. Other specs include up to 8GB of memory, up to a 2TB 7,200RPM hard drive and optional NVIDIA GeForce 705A graphics with either 1GB or 2GB of VRAM. The C560 arrives first, with shipments beginning in February for $659. The Horizon 2 and A740, meanwhile, are both expected to go on sale in June, each starting at $1,499. In this article: a740, all-in-one, All-in-onePc, AllInOne, AllInOnePc, c560, ces, ces2014, featured, features, hands-on, Horizon 2, lenovo, Lenovo A740, Lenovo c560, lenovoc560, video
All products recommended by Engadget are selected by our editorial team, independent of our parent company. Some of our stories include affiliate links. If you buy something through one of these links, we may earn an affiliate commission.