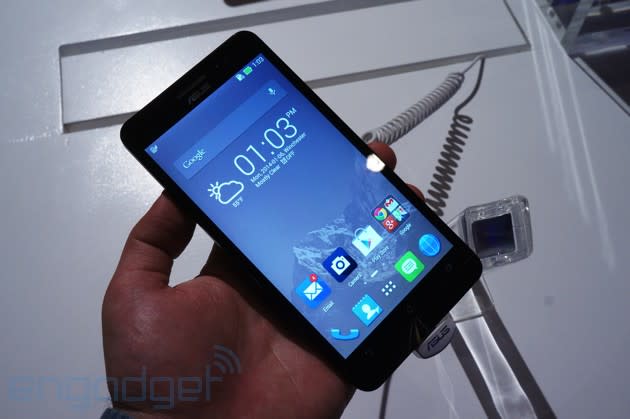 At today's ASUS press conference here in Las Vegas, chairman Jonney Shih unveiled a new line of low-cost Android smartphones, dubbed Zenfones. The devices, which come in a range of 4-, 5- and 6-inches, have dual-core Intel Atom processors inside and run a skinned version of Android 4.3 that ASUS is calling Zen UI. Apart from a focus on imaging software, Shih didn't elaborate too much on what users could expect from that interface. But it's clear from our brief time with the handsets that the sleek UI emphasis simplicity by means of cleaner fonts and larger icons. The real kicker, however, for these newly announced Zenfones is their pricing: $100 for the Zenfone 4, $150 for the Zenfone 5 and $200 for the Zenfone 6. And that's all off-contract. 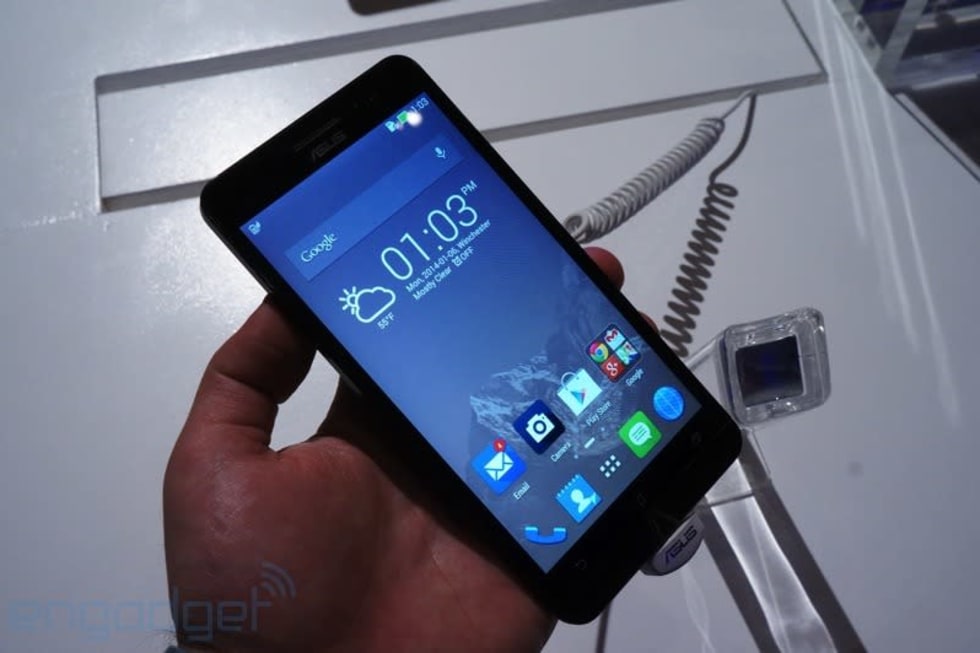 At the top end of this Zenfone spectrum, we have the Zenfone 6. As you can tell from the device's name, it sports a 6-inch, 720p IPS display that supports stylus and glove input -- the latter of which should prove helpful in the winter months. Despite costing only $200 outright, the Zenfone 6 doesn't come across as a cheap play for consumers' dollars. To the contrary, it feels solidly built; more like something that could withstand daily wear, tear and general abuse. Though the handset is outsized -- it proved nearly too wide for our hand -- it's also incredibly light, which should help to mitigate any issues operating it. Plastic is the material of choice here, but ASUS has crafted the Zenfone 6 in a way that gives it a soft touch, blunt edges and rounded back that fits snugly in the palm.

As far as storage goes, the Zenfone 6 will come in either 8GB or 16GB versions though users will have the option to expand that via microSD. It also features a 3,230mAh battery, 13-megapixel/2-megapixel cameras and support for Bluetooth 4.0 and WiFi b/g/n, though no LTE.

The Zenfone 6 and Zenfone 5 not only share the same 2GHz dual-core Intel Atom Z2580 CPU, so performance on both handsets is quite close, though the additional gigabyte of RAM on the 6 gives it a bit more edge. That said, navigation throughout the UI was brisk and most input actions were effected nearly immediately. It was only with the Zenfone 4, which has a 1.2GHz Intel Atom Z2520, that we noticed a depreciation in performance. But that spec drop is to be expected from the budget-minded Zenfone 4.

Coming in as the mid-ranger in the series, the Zenfone 5 is a slight step down from the 6. The overall construction and body is reminiscent of its larger sibling, but pixel density on its 720 panel is much higher owing to the (relatively) smaller 5-inch display. The reduction in pricing (this device retails for $150) doesn't necessarily distance it much from the Zenfone 6. The chassis is similar, but shorter and retains an impression of durability and understated elegance. Beneath that body, there's a 2.050mAh battery, 8-megapixel/2-megapixel shooter and the very same radios as the Zenfone 6. Configuration options, however, are broader with the addition of a 4GB model.

If there were a stinker in this bunch, it'd be the Zenfone 4. The device is truly aimed at the low-end market and abandons much of the attention to detail and build quality of the 5 and 6. In hand, it feels flimsy and cheap. Its 4-inch 800 x 480 display is, understandably, lackluster and performance bears the hallmarks of a less powerful processor -- it's noticeably slow to navigate the UI. At $100, we can't really hold the Zenfone 4 to task for its shortcomings, but it does scream budget.

ASUS isn't planning on bringing any of these Zenfones in their colorful hues to the US with official carrier partners anytime soon. But with such attractive off-contract pricing, those mobile users in the know should be able to import with ease.

Edgar Alvarez contributed to this report.
In this article: Android4.3, asus, asus zen ui, asus zenfone, asus zenfone 6, asuszenfone, asuszenfone6, asuszenui, CES2014, hands-on, mobilepostcross, Zenfone, zenfone 5, Zenfone4, Zenfone5, Zenfone6, ZenUI
All products recommended by Engadget are selected by our editorial team, independent of our parent company. Some of our stories include affiliate links. If you buy something through one of these links, we may earn an affiliate commission.