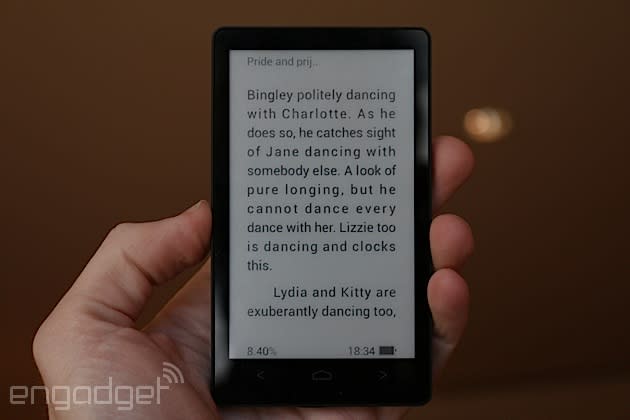 Alcatel doesn't just show up to trade shows with phones, it also likes to come with a handful of clever accessories (regardless of whether they're final products or just prototypes) as well. At this year's CES, the TCL-owned manufacturer showed off a 4-inch e-reader called the Magic Flip, which connects to your smartphone or tablet via Bluetooth. It's incredibly small, thin and light, and is meant to be a companion to your daily driver -- as long as it's made by Alcatel, that is. The Magic Flip is exactly what you'd expect it to be: a pocket-friendly e-book reader capable of receiving notifications from your phone. The E Ink reader, company reps tell us, is supposed accept every standard e-book format, which theoretically should make it pretty easy to transfer books back and forth. In terms of hardware, it offers three capacitive buttons underneath the display, consisting of backwards, forwards and home buttons. Since the demo unit we played with did not feature final firmware and was prone to quite a few bugs, we weren't able to navigate the user interface outside a basic demo page. Still, the Magic Flip makes its way to the market in the next few months, and even though it will likely appeal to only a small number of people, we appreciate a smartphone maker that's at least thinking outside the box and taking risks. 16
In this article: accessory, alcatel, alcatel hero, Alcatel Magic Flip, alcatelonetouch, ces, ces2014, e book, e books, e reader, e readers, e-book, e-books, e-reader, e-readers, hero, Magic Flip, mobilepostcross, onetouch
All products recommended by Engadget are selected by our editorial team, independent of our parent company. Some of our stories include affiliate links. If you buy something through one of these links, we may earn an affiliate commission.