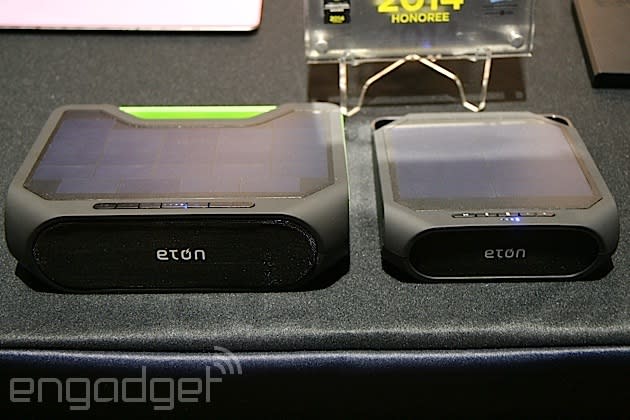 That pair of new solar-powered speakers from Eton that we told you about today just had their public unveiling at CES Unveiled, here at Vegas. So, you're no doubt asking, what makes the Xtreme so Xtreme? Ruggedness, of course. The speaker is water-resistant and can be dropped from a height of 3.3 feet. The wedged-shaped speaker is a pretty nice-looking thing and feels solid in-hand, even with those rubberized edges. As for sound, well, quality seems halfway decent, though the speaker doesn't get particularly loud. In this crowded room, we had to get pretty close to hear things clearly.

If the sun's not doing it for you, you can charge it up via USB. There's speakerphone functionality built-in, as well as NFC pairing for phones that support it -- no auxiliary out here, however. The smaller rukus II, meanwhile, also has NFC pairing and a new speakerphone feature, along with Bluetooth 4.0. That one will run you $130, with the Xtreme coming in at $100 more.

In this article: audio, bluetooth, bluetoothspeaker, ces2014, eton, rukusii, rukusxtreme
All products recommended by Engadget are selected by our editorial team, independent of our parent company. Some of our stories include affiliate links. If you buy something through one of these links, we may earn an affiliate commission.