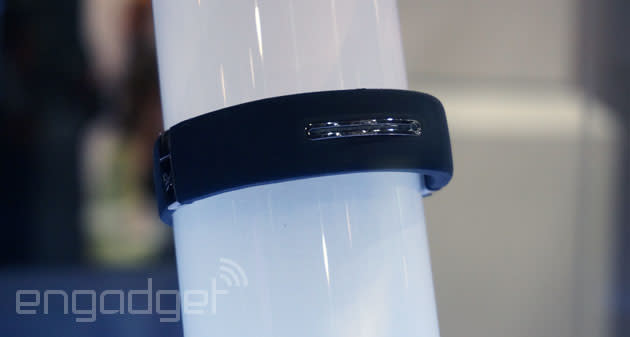 Because there might not be enough fitness wearables, Jaybird has announced its own wristband -- Reign. Health-centered (just like the company's recent Bluetooth headphones), we're promised activity and sleep monitoring, separating out users' movements by specific physical activity and sport. Details are otherwise pretty scant at this point: It will work with iOS, but we're waiting to confirm Android compatibility and we're looking to hear more details about "Go-zone," which will apparently read when your body "wants" to exercise and then remind you to do so. We've still got a lot of questions left to answer, but we'll be hunting down the band at CES for the rest of the answers.

Update: Here's a few extra details. Yes, it will work with Android phones, and it'll be priced a buck shy of $200. But, while that might seem a little pricey for yet another fitness band, the Reign addresses quite a number of our niggling issues with most wearables. For one, its silicon heart is smart enough to know when you're walking, running, swimming or (with a foot-mounted strap) cycling. The details of how long you've performed those activities and how many calories you've burned are fed to a rather slick looking app that presents data to you both in broad strokes and in fine grained detail, if you like. It also knows when you're asleep and how well you've slept, without you having to manually put it into sleep mode. Based on that info, he Reign is able to figure out your ideal amount of rest based on your activity level, and will even tell you if you need to sleep a bit longer after a particularly restless night.

Jaybird is perhaps most proud of the Go-Zone, which monitors how prepared your body is for exercise. It determines that based on variations in your heart rate. While you might only think you're ready to hit the gym when you're feeling 100 percent, the truth is your body is capable of quite a bit, even if you're operating at just 50 percent. In fact, you might even feel better if you push past that initial wall. The Reign will put all other activity trackers on notice around February.

In this article: CES2014, fitness, jaybird, jaybird reign
All products recommended by Engadget are selected by our editorial team, independent of our parent company. Some of our stories include affiliate links. If you buy something through one of these links, we may earn an affiliate commission.